I slept until six and still didn’t quite get enough sleep. Found that I hadn’t read the „Daily Stoic“ for four days in a row.

I waited with breakfast for my husband because I wanted to have a proper Easter breakfast together. We ended up not boiling eggs because there would be quite a few in our lunch. But I did have some more Osterzopf.

Then I started making the dough for our Genovese Easter pie. Making it took all morning and we had to resort to eating an appetizer beforehand: 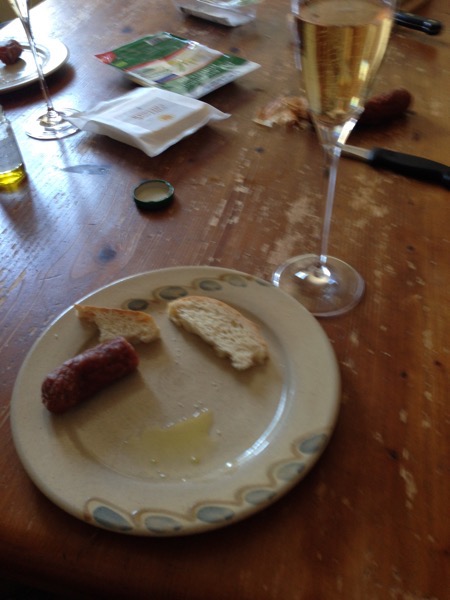 While lunch was late but it was worth it: 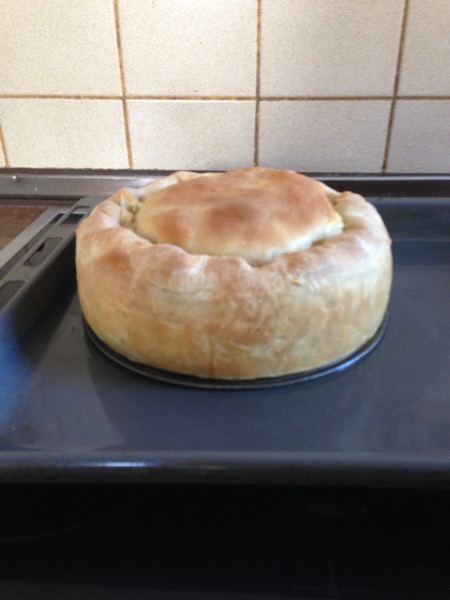 This might not look like much but it’s homemade puff pastry (I hope that’s the right term, had to look up Blätterteig with a filling of spinach, ricotta, parmesan and eggs. 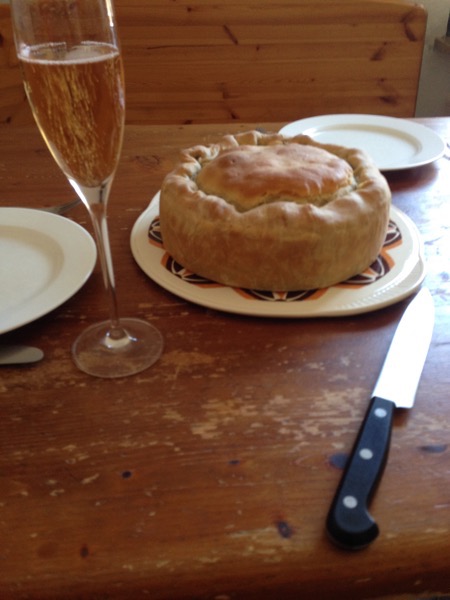 And here you see the inside and also that I should have left it in the oven a little longer: 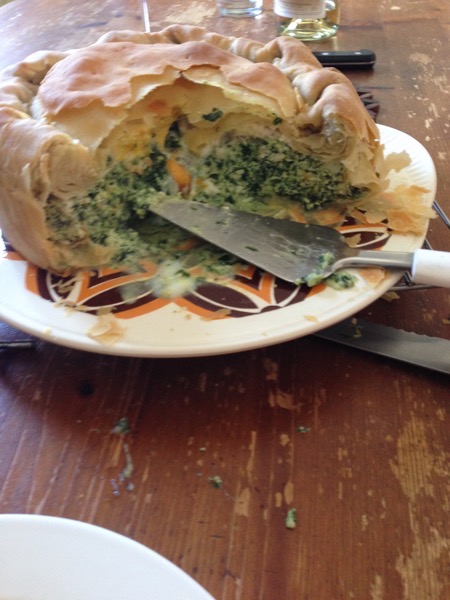 And my husband’s grandmother’s cake plate.

After that we took a little break and then suited up again to paint the balcony white. Only when we went upstairs my husband’s brother and one of his nephews were there and so we talked and my husband got to tell his brother all about the balcony crisis with the water streaming down the sides since the new floor was installed.

So we only started painting at five. And then we tried to paint the new paint evenly and thickly and failed. And it took ages. Not quite as long as the sanding but longer than we thought.

We did find our rhythm later but it took a while and then it was time to meet the boy at the train station.

I had spent all afternoon peaking at my phone because I knew he’d have about four hours to kill in Tübingen before stepping on the train and then I was a little worried he’d miss his connection.

But he didn’t text. I heard nothing until he asked if it would be okay to take a different train back home from Munich than the one specified on his ticket. It was totally fine, especially since that train didn’t exist anyway.

I painted racing the clock and managed to sloppily stain the last beam that was accessible without a ladder just in time, threw on some clothes without paint stains and when I rushed to the train station he met me halfway. He had taken an earlier train than I thought.

Meanwhile my poor husband was still perching on the ladder, balancing the bowl of paint in one hand and the brush in the other.

We all had another piece of Easter pie, my mother-in-law included, and since my husband had put it back in the oven again the egg in the middle was cooked all through this time. And it was delicious. We will certainly make that again.

The boy actually told me things about his trip. The youth hostel in Tübingen is rather picturesque and sitting right next to the river there, he was learning things about China and drinking all the tea in the morning and they had the afternoons off.

He looked rather tired but it seems his trip was fun. He insisted on unpacking immediately. Which means I taught him well.

Eventually my husband finished painting too, we each had a beer and then I got ready for bed.

Today there will be – wait for it – more painting. While the paint I bought is white it only stains the wood lightly and we are both thinking that three coats will be better than one. And we should have enough paint for that left.

But. That means we need to paint the balcony two more times.

We are thinking we should start real early today and then paint again in the early evening. You’re supposed to wait twelve hours between the coats of paint but I’m thinking the paint won’t explode if we cut it short. Also, it’s really warm and sunny here right now.

So. Painting, eating lamb at my mother-in-law’s and more painting.

Everything is still hurting, only a little more so. I’m still pretty stoked that I am physically able to do all of this. I mean, after the work we did the day before I didn’t expect myself to be able to roll out twelve layers of dough for the pie. They needed to be as thin as strudel dough. That’s the one you’re supposed to be able to read a newspaper through.

One more day and then we should be done. Wish us luck.