I did have a nicely productive day but unfortunately the balcony renovation is not going as fast as I hoped.

I woke up at 5.30 without an alarm and since I had taken the precaution of turning wifi off until 7 am for once I meditated first thing, then wrote morning pages and spent fifty minutes with the novel. Phew.

Then breakfast and after that I spent ten minutes on the book cover workshop. Mind you, I spent most of that time looking for pictures to practice with and then on how to open two pictures at the same time in Affinity photo but it was a start.

My husband showed up and then we talked and talked. It was a pleasure and I plied my sock yarn at the same time.

Then I decided since I had to go to the tea shop anyway I could get the things for our lunch as well and that took 45 minutes. Afterwards I proceeded to the hardware store for paint and such and it took me so long to buy paint that my husband was worried something had happened to me.

You see, buying paint for balconies is complicated. I did know which brand of paint I wanted to buy from the start but there were about four different kinds that might be the right ones. So I had to read all the descriptions on all the paint cans. Then I realized that they didn’t have that paint in white. Which meant deciding between the other, inferior brands of paint. And then I had to read all the labels for those and calculate how many canisters we’d need and put everything on my shopping cart. And then I looked around the corner and there was the paint I had originally wanted, in white.

So I put all the cans back on the shelves, pulled out the other paint, the one that I wanted, did the reading and calculating thing again, and then had to decided which kind of primer to get and how much.

I went to the cash register and paid a surprisingly big amount of money. For two big cans of paint, a bucket, a flower pot, two paint brushes and two pairs of rubber gloves. Weird. And that was with the 10% off-card that my mother-in-law had given us. I looked at the receipt and found that the cashier had thought I had two identical cans of paint. I probably wouldn’t have said anything if she had taken the price of the one on sale but she didn’t.

So I waited until the next customer was done, talked to her, had to go to the information desk, had to wait and then I got my money back.

So we had lunch an hour later than planned because of this. By then we were both pretty hungry so it tasted good: 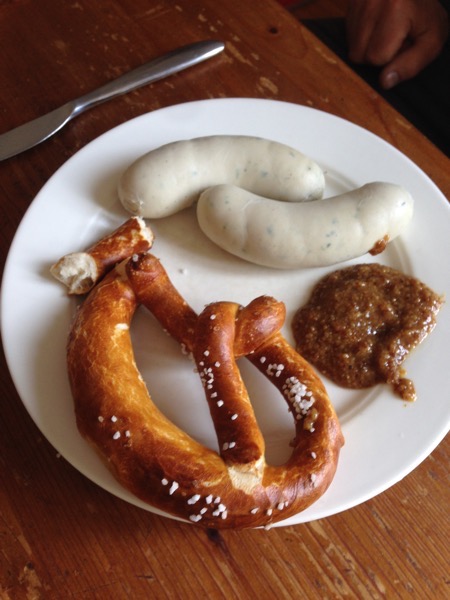 (I was too hungry to think about the picture before I started to eat, sorry.)

Then we took a bit of a break and then we finally started sanding again. Well, I did. My husband had already sanded away for an hour in the morning.

It isn’t going well. It seems I’m wielding the sander like a madwoman and all I get is dust and there is still paint on there.

And we were running through sandpaper pretty quickly. But we had more! Only that one only lasted for about five minutes before breaking. Oh no! But wait, there might be more in the basement! Yeah!

And then I had to stop sanding because I had to get ready to teach a student. So I worked a total of maybe 2 1/2 hours on the balcony and spent about two hours shopping. Not the most efficient use of my time, I must say.

I taught the student, got ready for bed, watched the monthly Orna Ross webinar and turned out the lights.

Today there should be a day of much sanding, only…

I might have scheduled lessons at 2.30, at 4 and at 6.30. Which basically means I can only help sanding in the morning. Because the sanding is dirty work and getting in and out of the work clothes takes time.

I might start doing the taxes just because I feel so bad about leaving my poor husband alone out there.