I didn’t set my alarm yet again and slept in until almost 6! Then lounged in bed until I got up for breakfast.

The boy showed up around eight which was good because he needed to get out the door around 9.30. I helped him cram all his stuff into the big backpack and we both hunted for the case for the old ebook reader he was taking but didn’t find it.

He will be gone until next Sunday and packed most of his clothes, two big notebooks, loads of pens and about two pounds of hair and beauty products. In his defense both his sensitive skin and his thick and curly hair need special attention but if I had been in his shoes I’d have left some of it home.

He was horrified to learn that two of the four trains he would be taking would not have wifi and had neglected to think about his phone’s battery life. This is something I see a lot of teenagers doing, they are using their phones constantly without taking care to have battery left for vital things like navigating an unknown city.

But the boy heeded my advice and spent some time reading a book. On the ebook reader, of course.

I did walk him to his train and had him take an earlier one because the ones going from our town to Munich are often late and my inkling was right, the train was late but he still caught the one he was supposed to be on.

He had to change trains twice after that and I was checking the train app every ten minutes to see if everything went right and got updates from him like, „I’m on the train now.“ Very helpful.

Everything went alright even though his next to last train was late and he only had something like two minutes to change trains. The only thing that could have gone better was that he didn’t have any lunch. I had suggested to him to take a couple sandwiches but he refused and said that he’d get a burger after arrival.

Well, apparently he met some other camp participants at the train station and they walked directly to the youth hostel where they are staying. No lunch.

Meanwhile here at home I spent most of the day watching the Paris-Roubaix bike race while plying some sock yarn: 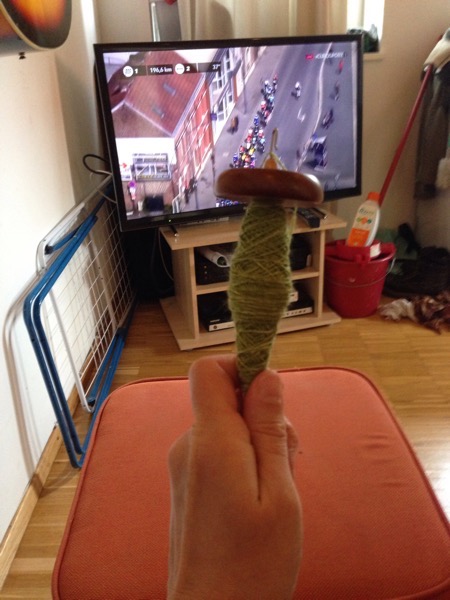 Sorry for the mess.

The only thing I did to help making lunch was peel the potatoes and set the table, my husband did the rest: 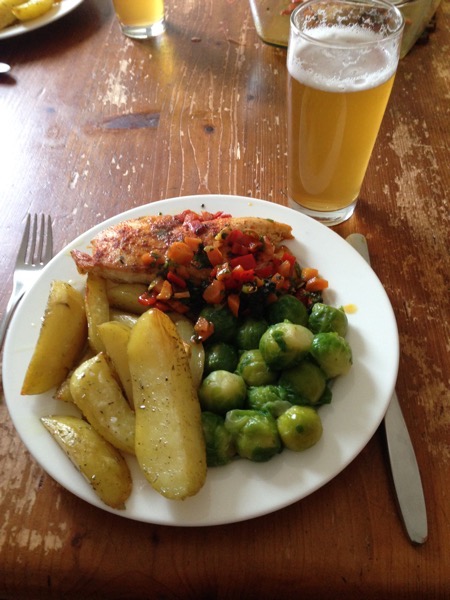 It was really good. That’s chicken underneath the veggies. I managed to do the dishes right away which was good.

Afterwards I went back to watching the race and spinning. I did finish the plying ball in progress, had a snack, changed into pajamas, shortly thought about writing and instead started watching Fred Astaire-videos on Youtube and then the „Alive and Kicking“-documentary on Netflix. I’m rather proud of the fact that I managed to stop watching that after an hour so I could turn the lights out before 10.

Today we will start preparing for the balcony thing, we will measure and calculate and see what supplies we need, I will take the bike trailer to the next town over to get paint and I’ll go to the health food store there (it is much nicer than the local one) and get things like meat and mint tea and lip balm and potato chips. As one does.

There was also talk of a hardware store run, I guess I’ll do that too.

So no running. I am actually hoping to start sanding the balcony already because tomorrow and the day after I have a couple of students coming so I’d like to get a head start.