I woke up early again but had slept a little longer than the nights before, so that was good. The night before I had been so limp that I forgot to write in my journal and make a list for the next day. That never happens.

I did make the list right away and meditated and then I started reading. And that was it for most of the day.

There were all the usual things, no writing, no newsletter, no exercise (that was planned, at least), I walked to the grocery store and back and after breakfast I had finished turning the heel on the toe sock and found that the sock fit. In that process I had switched back to metal needles. I keep switching between carbon and metal dpns, finding both sets slightly uncomfortable. The KnitPro carbons are very bendy and a little blunt and the very fine sock yarn keeps snagging on them. The HiyaHiya metal needles are more rigid and the right amount of slippery but they have tips so sharp that they keep splicing the yarn and poking them into my fingers is rather uncomfortable. I might have to look for yet another set of 1 mm needles, a size that is hard to get.

When I came back home my husband had company, a friend of his had showed up. They were talking about the horrors of climate change which made lunch a little later than usual but I was okay with that. It was rather good. No veggie option because the boy was eating at his grandmother’s: 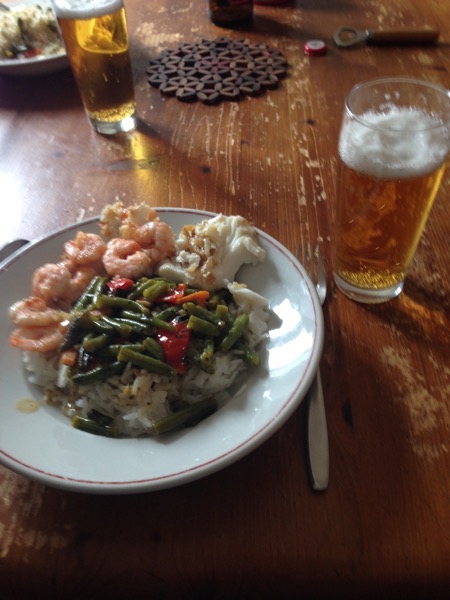 Because I felt so meh (I was even wearing my ‚meh‘-t.shirt.) I had bought too much chocolate at the grocery store and eaten it all. Which was a dumb idea because it made me feel worse. Story of my life: doing things that I think will feel good and feel worse later because of them instead.

By then I had basically decided to call the day a loss. My husband was complaining about feeling off as well, might have been an infection, or not.

I taught my first two students and the third one cancelled and then the day petered out. I did finally write the newsletter, though, and I did watch a webinar on using data to sell books on Amazon but unfortunately I fell asleep during the webinar. Barely managed to brush my teeth. The webinar was a good one, I need to watch the replay. I did turn the lights out at an almost reasonable time.

Today I will clean, do some walking, have Chinese for lunch, teach quite a few students and then flop down in front of TV. We might even watch a movie together, the three of us, which never happens but my husband just realized that the boy will be away for a whole week starting Sunday. So in order to spend some time together we might interrupt our regular watching of ‚Star Trek‘ and ‚The Big Band Theory‘ for something like ‚The Big Lebowski‘. We’ll see.