I set my alarm fifteen minutes earlier in an attempt to be more productive before breakfast but that didn’t work out. Then I told myself that I could work on the novel later in the day. (Spoiler: I didn’t.)

I was a little anxious about my gynecologist appointment even though it was only the yearly check-up but I wanted to talk to him about not being able to get the pill a week ago and about trying to not take progesterone anymore.

So I got up a little late while the boy was early and came down before his tea was ready. I was still in pajamas when he showed. We had breakfast nonetheless and he left for school on time and my husband was a little later. When he showed up it was time for me to take a shower so we didn’t really talk much. I did sit a little after I had gotten ready and knitted while he was finishing his breakfast so that was nice.

Then I went to the train station and took a train and then a bus to Munich for my appointment. I had to wait for an hour, unfortunately, while being drowned in easy listening music that was driving me up the walls. (I’m pretty sure that most people find that music soothing and nice.)

I was still out of sorts all day, partly because I had an appointment at all and partly because of still being exhausted and discombobulated from the whole renovation thing. Still, everything was fine and I got praise for having had both a colposcopy and a mammography last year.

We decided that I’ll leave the progesterone off and see how it goes.

And I apparently have moved from „When was your last period?“ to „Did you have your period since we last spoke?“ I am giddily looking forward to menopause, especially since right now I’m not having any symptoms. I hope it will stay that way, let’s knock on would, shall we?

I came home in time to help t make the salad. My husband had been busy all morning. He started fixing the shelf over the bed that has a loose bracket and cleaned even more things and ran errands. Lunch was very good yet again: 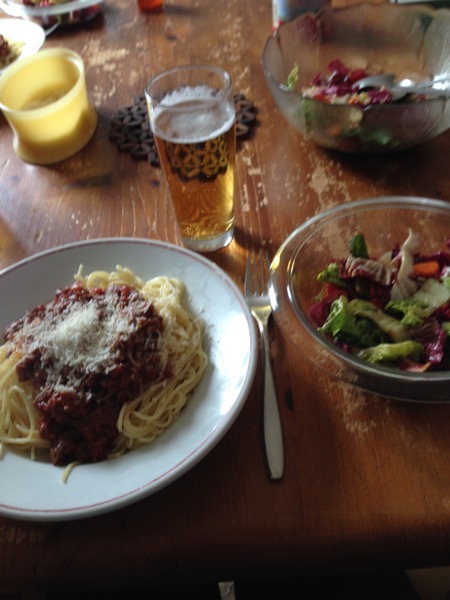 Then I sat and read for a bit, did the dishes, vacuumed and mopped the bathroom, kitchen and part of the living room and then got ready for teaching.

Teaching was nice as it often is and afterwards I did more dishes, helped my husband decide that the hole he patched for the shelf bracket was still not looking dry and couldn’t be drilled into yet, got ready for bed and spent the rest of the evening holed up there with a nice book.

Today I should get into a more productive mode again.

There will probably be pizza for lunch, I have plans to deep clean the parts of the bathroom that haven’t been done yet, and I will probably mount the new shower head. There will also be teaching. And I need to write the newsletter ASAP but that needs the kind of headspace that is hard to come by in all that chaos.

Since it’s Friday I’m also looking forward to watching some TV with the boy. Maybe not a whole movie tonight, something shorter.

And then I’m hoping to spend the weekend putting all the things back again. Or I might fall into a massive two-day slump. Either one or the other.