I woke up at 5.30 from the alarm, meditated a bit and lounged in bed. This is where I spent the last two nights: 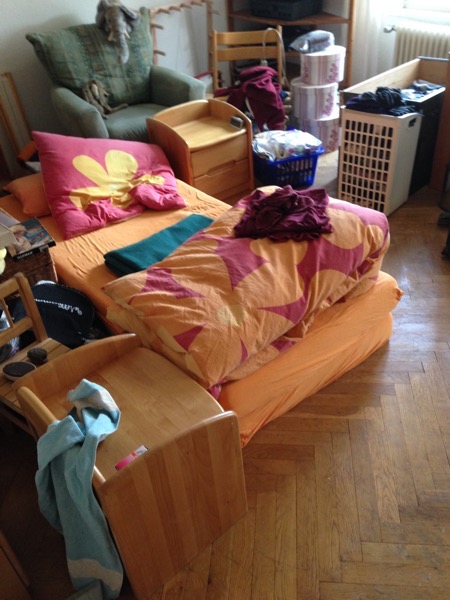 Fortunately our living room doesn’t have a lot of furniture in it yet, so there was space enough for most of the stuff that lives in the bedroom. The day before I had to lift three huge dresser drawers off each other to get to my clean underwear.

There was breakfast and a little reading and the boy was grumpy because he had a music test coming up and my husband showed up at his usual time.

I spent quite some time on social media in the morning, I will have to think about how to proceed from here because my month of mostly being offline is over now but I don’t really want to go back to mindlessly checking social media every other minute. For now I just play it by ear, we’ll see how that goes.

After my husband’s breakfast I did the dishes and such and then it was time to tackle the renovation again. My husband had already started painting parts of the ceiling yet again because now we could see where we had missed spots. Then we started moving all the flaked paint and the cardboard and the sheets and the tarps out of the house.

Our main goal was to get the bedroom ready for sleeping in again.

Everything went much slower than anticipated (as usual) and I basically spent most of the day on my knees scraping little flecks of paint off the floor. Or the doors or the baseboards. 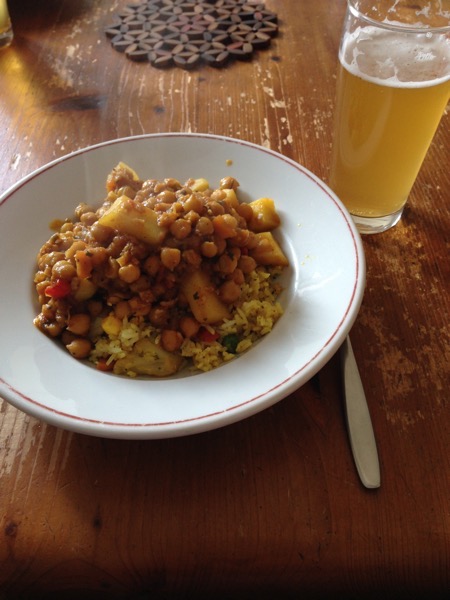 Then we went back to the scraping and scrubbing. Both of us had some more time before we were teaching. My husband had to go but my first student canceled and so I got to mop the bedroom floor. Progress! 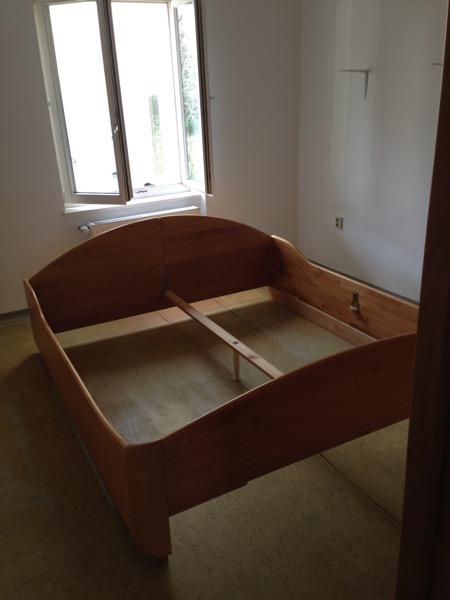 Still, it wasn’t time to move the bed yet because the lamp over it needed to be scrubbed off too.

Then I started teaching, my fingers sore and not in the best form for playing the piano.

When I had finished my last lesson my husband cleaned the lamp while I was doing all the dishes. Then he found that he had scrubbed some paint off the ceiling by mistake. Then he re-painted. Which made paint stains on the bed and the floor and the lamp. Then he started cleaning the floor. And suggested that it would be easy to clean that age-old dirt off with a sponge and some cleaner.

There were words. We moved the bed to where it is supposed to stay and got it ready almost in time for bed. I even moved the nightstands in. And my husband agreed that the new place for the bed works much better.

He cleaned the paint brushes while I moved things around. And I finally went to sleep, only an hour late or so.

That’s the good news. The bad news is that there is still is a ton of stuff to do, so guess who won’t be going for a run today?

Yep. In addition to cleaning the bathroom and the rest of the hallway floor I will also have to go to the health food store. And do laundry. And get all the painting debris out of the house but maybe we’ll do that over the next few days.

I’m really looking forward to have everything back in order (I know I’m repeating myself but that’s the hope that keeps me going.) but just realized that I never managed to actually declutter the bedroom before the renovation. I don’t think putting the piles back as they were would be a good idea so this project might take another day or two.