I woke up early again, 4.45 from the alarm, meditated for five minutes, wrote morning pages and after a bit of reading and procrastinating worked on the novel for almost an hour.

I had breakfast, waited for my husband to get up, knitted a little while he had breakfast, did the dishes and then it was time to start preparing the painting of the bedroom, bath and hallway.

Let’s say I spent the whole day moving things and cleaning things and in the end there was still more to clean and we hadn’t started painting yet.

My husband thought that it would be a good idea to deep clean the wood stove, something we had never done ever before, and that basically took all afternoon and went on into the evening.

Meanwhile I moved all my textile things into the living room, also the dresser drawers, both dressers, moved the mattresses and the slatted frames to the porch and spent what felt like a decade vacuuming the bed and everything. Our bed is a closed box with a big drawer at one end and the last time we really cleaned under it might have been years ago.

The weekly cleaning I do is way too superficial and when you start moving furniture for something like painting the walls all that lack of thoroughness shows.

We had a quick chili for lunch, about half an hour too late: 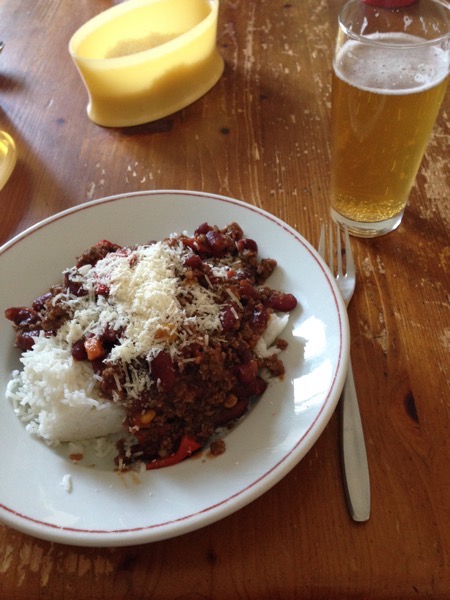 Lunch was rather tasty and we did take a longer break but then we were at it again. I had had hoped that we could start painting in the afternoon but all the cleaning took so long that I hadn’t even started putting tape and newspaper and tarps everywhere before it was time for dinner.

By then I was pretty exhausted and we decided to call it a day, so I took a shower and watched some „Deep Space Nine“ and „Big Bang Theory“ with the boy.

When we came back to the old part of the house my husband was still cleaning that oven. Which was a bit of a problem because a) he should have stopped working around dinnertime as well, b) I really wanted to go to bed and since my bed was dismantled I had a mattress in the living room, right next to that oven and c) the whole living room reeked of whatever he was using to get all those years of grime off.

Now, don’t get me wrong, I am really, really grateful that my husband is the one who usually tackles those big jobs and keeps at it until they’re done. But. In my opinion, cleaning the oven another time and spending more time and energy on preparing for the task at hand might have been a better way to use our resources.

I wanted to go to bed extra-early because of daylight savings time starting in the night but had to wait until he was done cleaning.

Today I am really hoping to get to the actual painting of everything. Since we did not paint the bedroom yesterday I will have to spend another night in the upheaval that is the living room at the moment but that can’t be helped.

After the painting there will be more cleaning (I am foreseeing a frantic cleaning of the tiles in the bathroom by my husband with copious swearing, he was barely able to leave those alone yesterday but I convinced him that cleaning the tiles after painting might be a good idea.) and then I’m hoping we will be able to move everything back to where it belongs in a swift manner.

This will be a fun Sunday for sure!