Woke up from the alarm, meditated and wrote morning pages. Then I had a bad case of „it is the weekend and I don’t want to work first thing in the morning“ and didn’t write. Why I’m thinking that when writing makes me always really happy, I don’t know.

So I lounged in bed reading until it was time for breakfast and after breakfast I started reading „Finish what you start“ and making notes. While knitting. My husband showed up and had breakfast and just when I was starting to get angry at the boy for getting up late he showed up too.

There were dishes. And then I went and ran/walked for almost 10k: 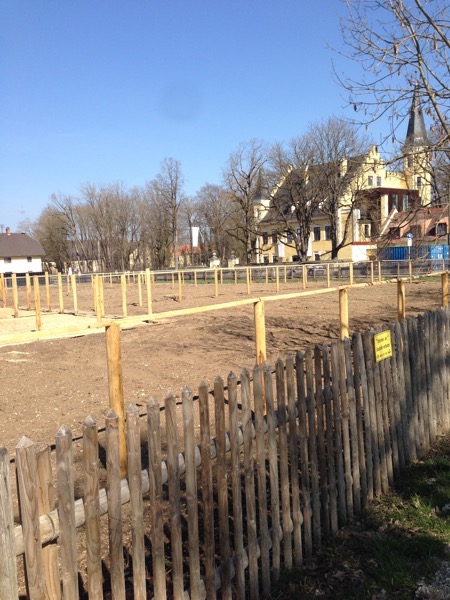 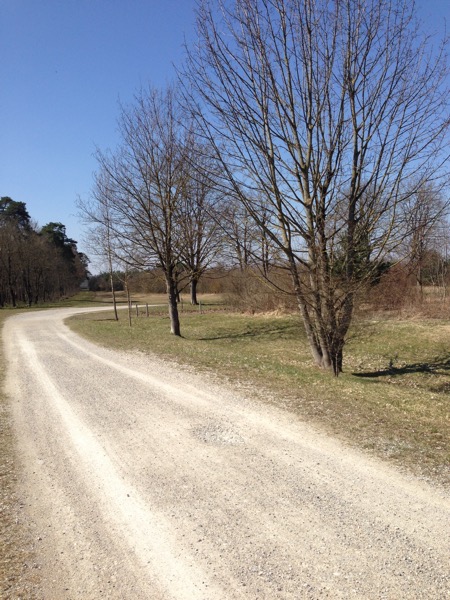 Just so you see how idyllic this place really is, the above photo is what I would usually post and the picture below shows what you see when you stand in the exact same spot but look left. 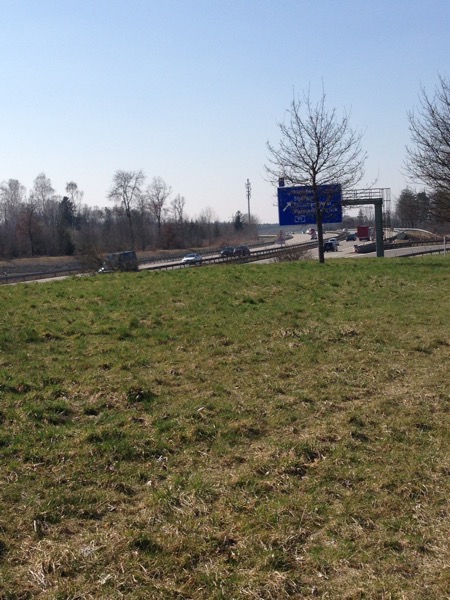 Running was actual fun and I was even a little faster than usual (8 minutes 34 seconds per kilometer overall). I have yet to find out why I’m usually a little faster on longer runs. One reason is that I’m always walking for about 1 1/2 kilometer in total (plus some more but that varies) but I’m also thinking that I’m more resigned to things being uncomfortable when the whole thing is going to take more than an hour. Maybe.

I came back home, took a shower and helped to make lunch. My husband tried making the American classic of spaghetti and meatballs: 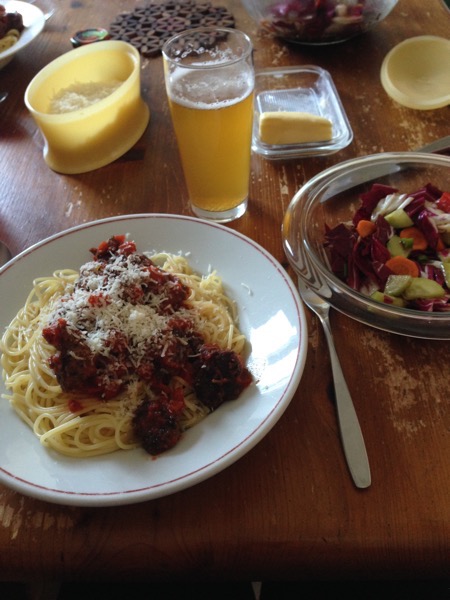 And for the boy he made some dumplings from walnuts, leftover potato, flour and egg. They were rather good and I forgot to snap a picture of them, my bad.

Then, after more dishes, I wrote a few e-mails, read a little more, went and looked at social media even though I’m not allowed under my rules for March, tried glueing two knitting needles back to together with their tips and failed and then I finally tackled the heaps in the bedroom.

These heaps are epic. I’m usually too embarrassed to show them to the world but, well, here they are in all their former glory: 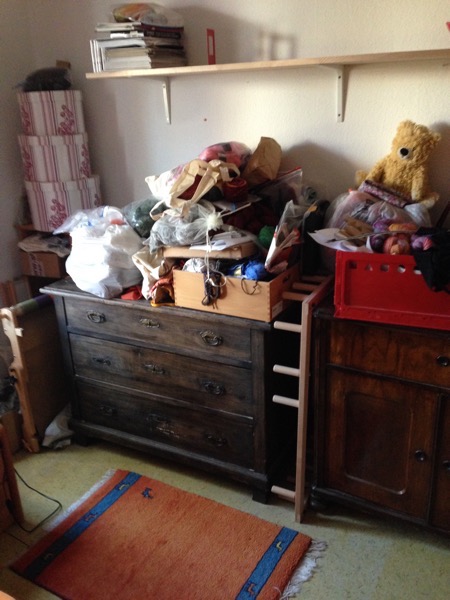 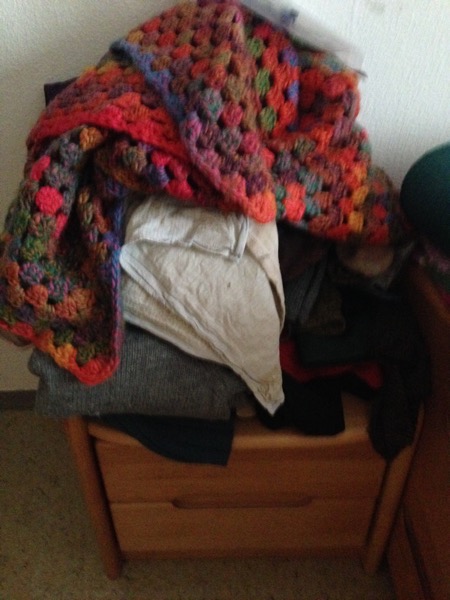 Mending, fabric and a crochet blanket that the boy doesn’t want anymore and I don’t know what to do with yet.

I worked for an hour and tackled about half of it. I moved all the fabric to its new home in a dresser in the living room that the boy used to store his clothes in which meant that I gained 1 1/2 empty dresser drawers. I packed the half-empty drawer with leftover yarn and started filling the completely empty one with projects that are sort of current. Sweaters that I want to re-knit, unfinished spinning projects and such.

I found two bags with knitting needles and notions that I inherited a few years ago and managed to actually go through them and decide what to keep and what to get rid of. Now I only need to find someone who wants all the needles I already own. I think I might post them in the flea market thread on Ravelry at some point. Right now I put them with the books that I had listed for sale that I then unlisted and had always planned to re-list again that I just decided to just toss away instead.

I had to stop dealing with the piles because the boy and I were due for bodyweight training. Since I sort of felt I had done enough exercise for the day already we opted for three sets of three.

Then we sat down and watched the first of the new Star Trek movies. We are both a little conflicted about them but they are good fun.

And then I went to bed on time which is great on a weekend.

Today I want to do yoga, maybe deal with a little more of the piles and have a virtual knitting meeting with Julia. Oh, and start preparing the next podcast episode. And think about the newsletter a little more.

I’m hoping for a chill Sunday because we might be painting the bedroom, bathroom and hallway next weekend.