I woke up from the alarm after sleeping enough. This never gets old. Then I meditated right away so I didn’t forget, wrote morning pages and started writing for fifty minutes. Sweet.

Breakfast with the boy and my husband showed up right after again. Seems to be the new normal. That got us off to an early start which is not the worst thing to have.

I sorted through the stuff that formerly occupied the fridge and kitchen bench and ended up with piles of half-read books and comics. I’m not quite sure where to put them and I definitely want to read them all, I just don’t quite know when. One problem is that it’s all on paper and I don’t really do paper books anymore. I know, weird.

I also decided to finally give up on the last two books of the „Shadowmarch“-series by Tad Williams. I did like some aspects of the first two books and as usual I really wanted to know what happens next but the second book was mostly slog already and then I started the third one and somehow never finished it. And the fourth one has occupied my shelf of unread books for years now.

Okay, I just looked it up and I bought the third book, „Shadowrise“ in January 2010. And I haven’t managed to read it through in all these years. I’m giving up.

Then I went to the grocery store, this time on foot because I felt like it wasn’t all that much to carry and when I’m walking I can listen to podcasts. Came back home and helped a little with the cooking. Lunch was very good: 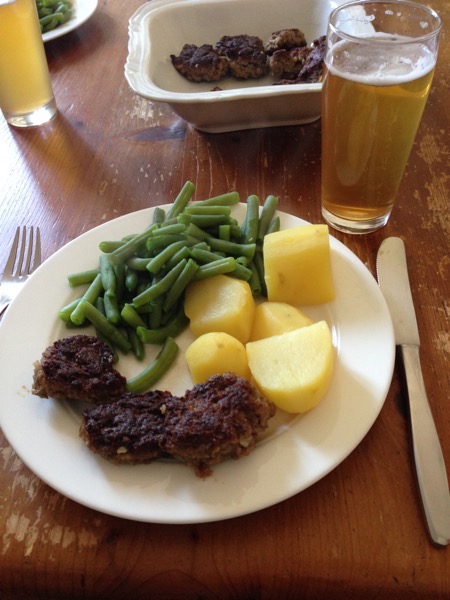 The boy was home a little later than I had hoped because we had that oral surgeon appointment. He had to eat lunch real fast and then brush his teeth in a hurry but we made it on time. The surgeon’s office is just ten minutes away from our house, if that.

I had been worried about that appointment because I had no idea what would happen and when we would be able to get an appointment for the actual wisdom tooth extraction and such but my questions were all answered and we now have a date in mid-June, right after our visit to my parents. The boy will have four days to recover which should be enough.

We came back home and there was still time before my first student so I practiced a little. Then teaching, then a break, then more teaching.

The boy and I opted for moving strength training to today because it was already a little late by then.

And then it was 7 pm and I was ded. I need to find me some more energy in the day. I am very motivated to make more changes and get all the things done! Again. I also am thinking that I have to be content to not finish this novel before my trip to Hamburg. I really tried spending enough time writing over the last two days and I couldn’t fit it in. Not for lack of time, this is more of an energy management issue. Which I’ll continue to think about.

Today will be pizza Friday. And I will do a little cleaning and quite a bit of teaching and then there will be bodyweight training and then the watching of Star Trek. Preferably while having a beer.

And then the weekend on which I’m planning to declutter the bedroom.