I woke up from the alarm and then didn’t do much for two hours. Got up a little late, had breakfast and then the rest of the family showed up. We had asked the boy to get up early for a Saturday because he still needed to go through about half of the things left in the living room from when it was his room.

I never got around to running either. We started right after breakfast, there were dishes and my husband cleaned all the things and the boy needed a little help with deciding what to keep and what to get rid of (we still need to actually get rid of everything and we also need to go through all the LEGO and the stuffed animals).

And then I started putting tape everywhere to make painting easier. And that’s what I did the rest of the day.

We did take a break to make lunch and it was extra-yummy. Since we had seen that „Salt, Fat, Acid, Heat“-documentary I was inspired to buy different kinds of salt. I had gotten some fleur de sel and some other sea salt and those are both amazing. We put some of that sea salt that is pretty coarse and of a light gray color on both the potatoes and the Brussels sprouts and it was a revelation. Huh. Who would have thought. The boy tried arguing that the actual structure of the salt crystals couldn’t be different but he was floored by the taste as well: 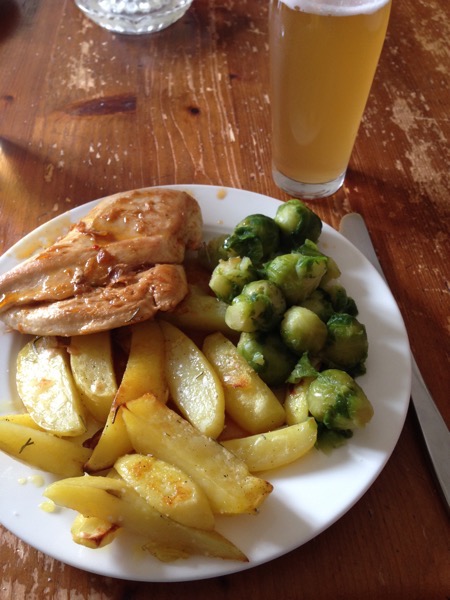 Then we took a little break, I did the dishes and then we were back to preparing for the painting. And we prepared and prepared and I used two rolls of tape and then it was time for dinner. Well, almost. But we decided that it was a good idea to eat first and wade through gallons of paint afterwards.

And then we sat there and had very nice sandwiches for dinner, with boiled eggs (and yes, there was more special salt involved) and bresaola and I started getting drowsier and sleepier. And we might have finished the painting that day, maybe after three more hours of work but what if we didn’t? And since I’m getting up so super-early these days my energy is really waning after six pm. Also, I know from experience that painting after dark can lead to some sloppy patches. I mean, we used to be pretty nocturnal back in the day. I distinctly remember the time that my husband got one of his fits back when the annex was built and I ended up painting furniture at midnight on the porch. I can’t really recommend that.

So the boy and I watched some „Star Trek Deep Space Nine“ and another episode of „Big Bang Theory“ and we called it a day.

Which means today will be the day of painting. My husband has looked at everything again and is estimating that we’ll need two hours for the kitchen, three for the living room and another hour to clean up. So that will take most of the day.

I might not make a to do-list, even. I’m not planning to do any writing, practicing or anything else. There will be food, though. Some things you just need to fit in somehow.

So, if everything goes as it should we will finally have a nice, shiny, useable kitchen and living room again by tonight.

At least I hope so.