.Woke up from the alarm and started reading right away. Yeah, I know. I did manage to meditate and to listen to the daily piece of classical music, so that’s something. No writing.

Got up, had breakfast, found that I had moved all the knitting to the bedroom because of the impending renovation and moved some of it back, of course. I’m finding that the running socks I’m knitting are really taxing my patience because knitting 3-ply takes a lot more time than knitting 4-ply and the stitches are just so tiny and the needles really thin. The fabric looks and feels great, though.

I finally got around to listen to the podcast and write the show notes. I wasn’t quite finished when my husband showed up but since he was building the fire again it was fine. Also, he basically started cleaning and preparing everything for painting right away. He has really worked like crazy on this. I haven’t.

I had had plans to go for a run but decided to stay home and do some writing. I had ditched my weekly cleaning because it didn’t make sense to clean everything only to start painting the day after.

Then I got the podcast ready, published the blog post, finished uploading the video and wrote a couple of posts on social media to announce it. Unfortunately, I forgot to attach the audio file to the blog post. I was lucky that I couldn’t keep away from Ravelry. A mind listener told me that her podcatcher couldn’t find the new episode. Oops.

Then I did make an appointment with an oral surgeon because the boy needs to have his wisdom teeth removed. I was so fuzzy while on the phone that I couldn’t remember my own phone number for a second. That was embarrassing. It’s always hard to find a time where the boy and I can go and see a doctor together because of school for him and teaching for me. I got an appointment for Thursday at 3. My first student on Thursdays usually comes in at 4. That was cutting it a little close even though the surgeon’s office is only a few minutes away.

I am rather proud of myself, though. While I did feel a little embarrassed for not remembering my phone number and being spaced out on the phone when I realized that the appointment would be stressful because I wouldn’t have any margin for error I picked up the phone again and asked if I could possibly have an appointment at 2 on a Thursday. And lo and behold, the 2 o’clock slot was still free. She just hadn’t offered it to me. So while it will be a little hectic to get there, maybe, I won’t have to leave in the middle of the appointment in order to get to my lesson in time. Phew.

And then I called the dentist’s office to tell them to send the boy’s x-rays from the orthodontist to the oral surgeon. Yes, I know. Complicated.

I guess that filled my adulting quota for the day.

My husband went running and somehow I neglected to tell him that I had decided to stay home. I tried writing but got stuck. I think that might have been the problem the two days before as well – I just didn’t know what would happen next.

There was some singing and then there was the making of the pizza: 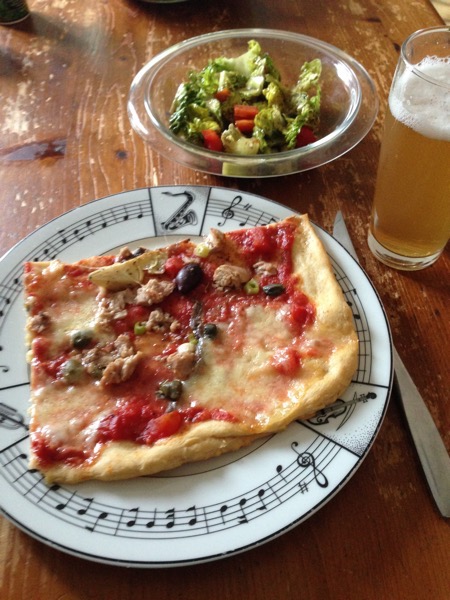 Oh, and some time in the morning I had gotten a text from the boy that he would be home later than usual. Which was a little odd but I thought there was some school thing he had to attend or that he maybe wanted to do something with a friend for a bit.

I did start to worry when he was more than 90 minutes late. And then, thirty minutes after I had started worrying he came home, all wet and cold. Apparently, he had gone to Munich for „Future Friday“. It seems almost everybody had gone and the school didn’t mind.

I did give him a short lecture on how to tell your parents where you are and what you are doing. „Today I’ll come home later,“ Is not an adequate message in this case. „We are all going to ‚Future Friday‘ in Munich, I’m not quite sure when I’ll be home but everything is alright,“ would have been a much better version.

So I fed him cold pizza and salad and made him promise that he’d sort through all of his crap that still occupies the living room.

I went over to the annex for my first student. Pity she didn’t show and didn’t call. When I was coming to the old part of the house after having waited for fifteen minutes the boy was just showing up again. Seems he fell asleep after lunch. He did start sorting after helping me with the dishes, though. Doing the dishes had the unexpected side effect of giving me ideas for the next two scenes in the novel. Sweet.

I taught two students and when I was finished the rest of the family was eating dinner. It turned out that the boy had only gotten halfway through his stuff. So I made him promise to get up early today to sort the rest.

Then we watched an episode of „Star Trek Voyager“ (another good one, the series is really starting to get better) and an episode of „Big Bang Theory“. Then we talked a bit, searched for his Skylander collection and I finally got ready for bed.

You know, now that I’m writing it all down I don’t feel quite as lazy anymore.

Today there might be running but I don’t think I’ll do the 10 k that’s on my training schedule. And then it will be cleaning and preparing everything for painting and then the actual painting which is always way less work than all the stuff you need to do before and after. Like finding clothes to wear while painting.

And tomorrow will probably bring more of the same.