Things are really picking up around here.

So I wake up at five because operation ‚get ready for daylight savings‘ is still in full swing and started writing morning pages. I meditated and read for a bit and then started writing. Guess who was in a good mood today…

I got up, made breakfast and ate it and was just debating whether to write some more when my husband showed up early. Fire in the wood stove. We talked and I knitted and I’m not sure if I should change something about the Coriolis sock I’m knitting. The gradient makes weird blocks of color because of the heel. I didn’t think about that beforehand. Now there is a way to knit a sock that is almost the same with a different heel construction but I’m not sure I want to.

I might knit this one for a little longer and then decide.

There was some housework and just when I wanted to go for my run did I realize that I had promised my husband that I would get potatoes from the farmer’s market and that I’d need the bike trailer for that and that I couldn’t run first and get potatoes later because by the time I came back from running the market would be closed. And my husband was away buying beer. With the trailer.

So I busied myself getting ready and peeling some other potatoes. Then I rode my bike into the wind, met my mother-in-law at the market, bought my big sack of potatoes and biked home again. The farmer who sells the potatoes always insists on carrying the potatoes over to my bike trailer. Every single time. When I told my husband he said that he always had to carry his own potatoes.

I did tell the farmer that I can carry my own potatoes but he always does this. I made up for it by carrying the whole sack, all 25 pounds from the garage to the door by myself. The thing is, 25 pounds is not that heavy. The average toddler weighs about the same,

Then I finally went running and found that my legs were still extra heavy. So I cut my run a bit short and walked a lot. The weather was rather windy but nice: 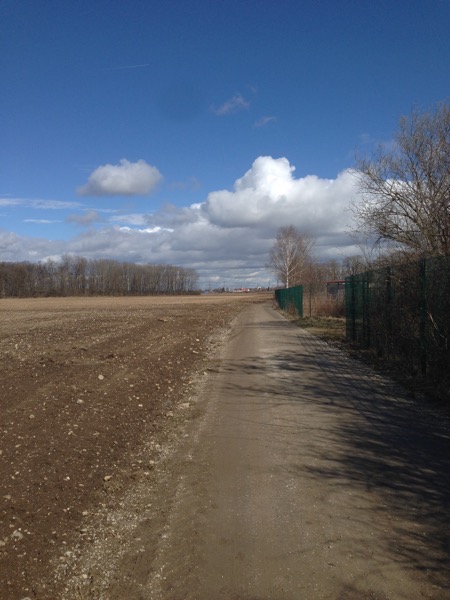 And all the fallen trees were cleared away. 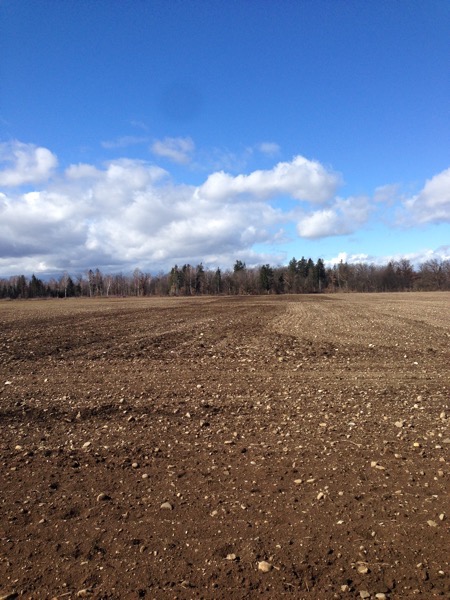 I came back home then we had lunch. Wednesdays we usually eat something that is quick to make because my husband is running and has to start teaching early. Not much time for elaborate cooking: 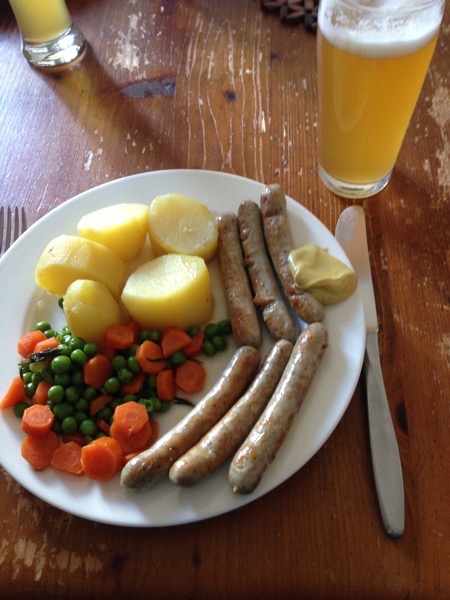 And yes, it’s time that I go grocery shopping again, we’re almost out of veggies.

Then the boy came home, I helped him a little with learning a poem by heart, then I hung up a load of laundry, took a shower and did the dishes. And ended up having only about 25 minutes of free time instead of the 90 minutes I had hoped for. That always happens to me on Wednesdays. I should plan for it.

What I had planned was to start getting the podcast ready. But there was no time.

But then the next two students didn’t show (one had called and the other hadn’t) and so I had enough time to get the podcast all cut and put the video and audio together.

I also did something a little complicated. The boy is all done with his braces. So as an incentive for people to stick with the whole braces routine until the end you have to pay something like twenty percent of the cost out of pocket. But if you finish the whole procedure you can ask for your money back. So I gathered all the orthodontist invoices and got the right form off the internet and filled it in and made the boy and my husband sign it along with me and found the letter from the orthodontist where she states that he is all done and put it all together and found an envelope and weighed and measured the whole thing to find out how much it would cost to send and got a stamp off the internet and printed it out.

So later today I will put that fat envelope in the mail. Hurray! And then I will get a sum of money back that is twice as much as I thought it would be. Let’s just say that we might be all set for August when we usually make less money than the rest of the year.

Then I made the boy play piano for the first time in ten days or so, taught another student at a time where I usually only shut down, started this post, got ready for bed, wrote in my journal and went to bed.

Oh, and my husband stated that he wants to paint the kitchen on the weekend. I’m all for it even though it means that I won’t sew or write much. It’s time to claim our apartment back. So today I am planning to get groceries and go to the hardware store to get paint and more mold treatment. And I need to find out if we need any brushes and stuff.

That’s one of the few times that having a car would be great. I mean, I could maybe get the paint and leave it in the bike trailer in front of the store for the time it takes to get groceries. Both stores are near each other at the other end of town. Doing it the other way around might be awkward. Especially since I need to buy frozen veggies and blueberries.

I’ll see. It might also snow later today in which case I might clean today and buy paint tomorrow. Because the snow won’t stick. At least I hope so.

So today there will be grocery shopping and maybe paint shopping and then the boy and I will go through the things of his that are still in the living room and I will listen to the podcast and write the show notes, finally, and I will teach quite a few students and do some strength training.

And go to bed early. That is rather important.