I woke up a little before the alarm even, always a good sign. For once I did write my morning pages and did all the morning things including listening to the piece of classical music of the day from „Year of Wonder“. There are about five pieces I skipped so I’ll put those on my to do-list one other day. I decided that waiting until I had time to listen to the all in order was dumb and just dove back in again. I also wrote a bit but there weren’t many words. I had to actually do a little research and that slowed me down. All good, though.

There was breakfast and the boy had forgotten to set the alarm to tell me that he was up but I didn’t panic and just sent him a text message. I’d rather not climb two flights of stairs without reason.

After breakfast I started preparing the podcast and then my husband showed up and started the fire. Which was very good, it was snowing and much colder than the days before.

And then my husband attacked the living room with gusto. That is the one that was the boy’s room until, um, about 17 month ago. Unfortunately, we haven’t managed to renovate it yet or even to get the rest of the boy’s things out. It’s all the things that he doesn’t need and want but he is afraid of all the emotions that might come up when he deals with the stuff.

My husband said he’ll throw everything away if it isn’t dealt with in a few days. Then he cleaned everything.

I did help some, did the dishes, sorted through the board games (I’m sure the boy doesn’t really want any of them so I put the ones I’d like to keep in the place where my board games are kept and left the rest for him to sort through.) and went running. After shoveling the sidewalk. For once our sidewalk was the cleanest in the neighborhood because it had only started snowing after everybody else had left for work.

My 6.44 k run was rather soggy, my socks were totally wet when I removed them afterwards. And you can see that there were storms last week: 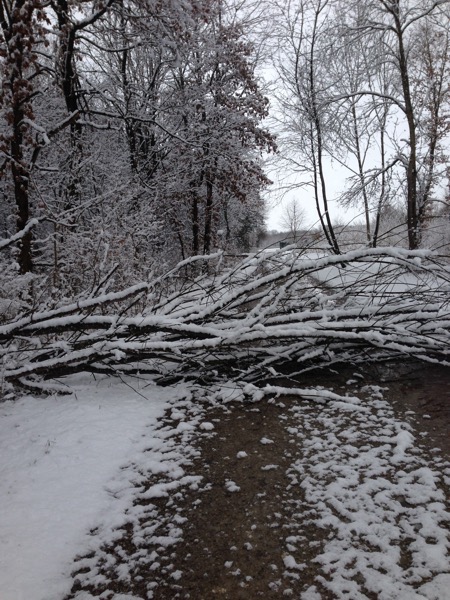 I was able to pass that tree on the right hand side. 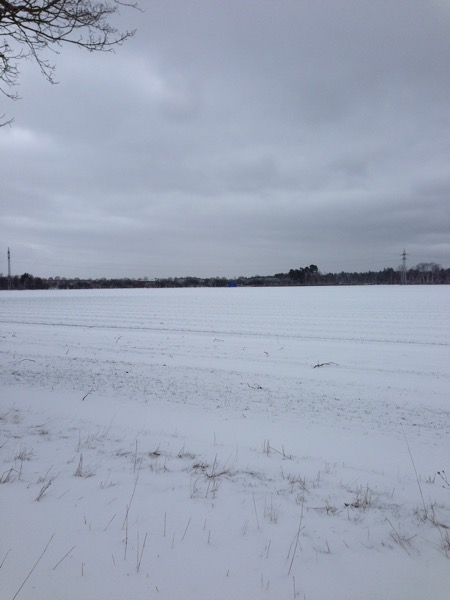 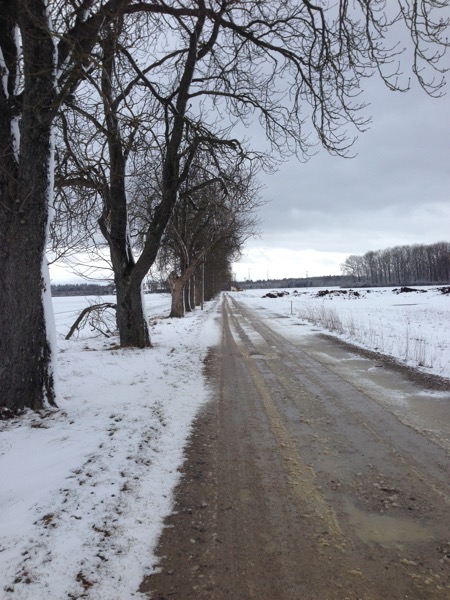 At home I helped a little with lunch, then took a shower and started putting all my gear in place for recording the podcast. We had lunch and it was fabulous: 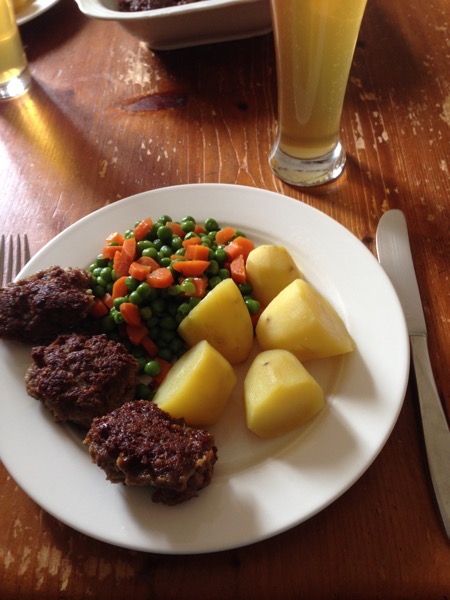 Then I did the dishes real quick, told the boy that he will have to sort through his stuff until the end of the week and that we’ll be doing strength training at 6.15 and recorded the podcast.

The good thing is that I now know where the weird sound comes from. The bad thing is that the weird sounds comes from the mixer unplugging itself from the computer which makes the computer switch to its internal microphone. And that one really isn’t good. So there is nothing wrong with garage band or the computer it’s just that the weight of the cable and the three adapters makes the plug move something like half a millimeter and that’s enough to sever the connection.

This time I had set up the settings differently so every time the mixer got unplugged the recording stopped. And that happened twice. Once because I set down a notebook on the cable (rookie move) and the second time just out of the blue. I am not amused. But now that I know the reason for the problem I might be able to do something about it. I might be able to find a way to secure the plug better or I might try a different kind of adapter. I’ll have to see.

I had to cut the podcast a little short because I needed to get ready for teaching.

Teaching was fun. I’m so happy that I’m happy doing my job again. That’s something Duckworth talks about in „Grit“, by the way, she teaches you how to find meaning in the job you’re doing so that you can be happier. I can tell you from experience that it works. I mean, not that I ever thought my work wasn’t meaningful, I just had started to lose the joy in it a bit.

Then the boy and I did our strength training and I forced him to sort through a couple of board games, Pokémon cards and books and then I got ready for bed and rewarded myself with reading.

Today will be a rather busy day again. I want to go for a short run, go to the health food store, help with lunch, prepare my lessons for the week and teach all the students. The first is coming in at 2, the last will leave at 7.30 and there is only one short break in between. That will be fun!

So I probably won’t get a lot of writing done today either.