Yep, that was stupid. After the first day in a week that I felt rested and motivated to tackle things I went and didn’t stop reading a novel in time, turned out the lights at one and had to suffer through a really overtired Sunday.

A real example of how thinking of short-term pleasure can kill your long-term happiness. Well, for a day or two. But a day is a substantial part of a week.

So I turned my alarm off yesterday morning and managed to sleep until six. Then I didn’t listen to classical music again and didn’t write first thing again (it’s a new habit!) but I did get up almost on time and made myself breakfast.

I could see the effects of my sleep-deprivation right away when I started making my tea and then found that while I had set out my muesli bowl (that’s always the first thing I do) I had gotten distracted and had forgotten to actually take the blueberries out of the freezer. Breakfast was slightly late.

I have to say that I did okay until the point where I started a fight with my husband (not intentionally) because I let myself get triggered by a small remark of his and then I just didn’t stop. Bad move.

So we spent quite some time talking that one out. Which meant that I didn’t do yoga before lunch.

Lunch was fabulous, though, and by then our mood had gotten little better: 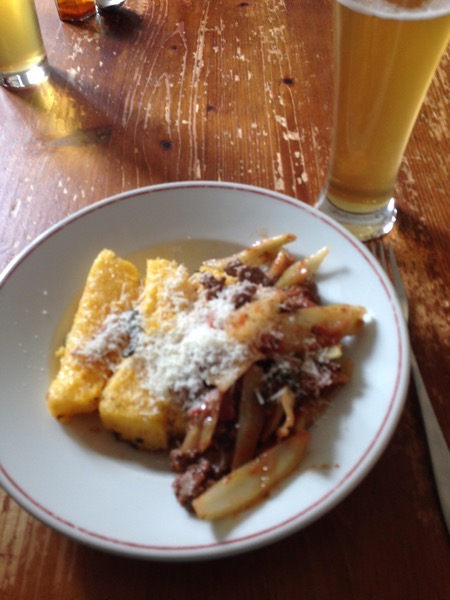 Since I was so super-tired I actually managed to make myself do the dishes right away. I knew if I didn’t they just wouldn’t get done. Likewise I did also manage to write for a bit in the morning. I knew that I wouldn’t have the energy in the afternoon.

And then I basically hung around reading for most of the afternoon. I am now on page 166 of „Grit“ by Angela Duckworth which I can highly recommend. I find it especially interesting not only because I’d like to become a grittier person myself but also for teaching my students. I’m also a third into another Sarina Bowen novel. I found „Man Hands“ in my „to read fiction“-folder on my ebook reader. I didn’t even remember buying it. It might have been free or very cheap. I thought I wouldn’t like it but I really do. I will also at some point in the future have to read a few of her novels again with pen and notebook in hand to see how she is doing it.

I mean, if you had told me that I would one day read romance novels – with hockey players even! – I would have laughed in your face. And then Gail Carrier recommended that book and another one, I looked at a sample and got hooked. And now I’m reading them one after the other (I actually resisted buying „Hard Hitter“ for almost a year because I knew if I started it for real I would binge-read all the other books in the series. Seems I know myself well.)

And now I want to know how to write characters as compelling as hers and how to write all these emotions. Might take me a few years of deliberate practice.

And yes, I used to think that romance novels were dumb. And yes, I was completely wrong. Sorry.

My husband and I talked about our home improvement projects. I might buy paint for the kitchen and the living room this week. That would be great. And no, we won’t choose colors carefully or anything, we’re just going with boring old white. Having nicely white, clean walls will be fabulous.

I did some yoga in the afternoon, planned out my week, ate some cheese, couldn’t decide which project to work on next for long enough that there was no time left at the end, read some more, watched some TV with the boy and went to bed early. Probably the best thing I did all day.

I made an executive decision to not move my alarm fifteen minutes earlier because of the sleep deprivation, I will do that tonight instead. I’m really curious if the transition to daylight savings time will go smoother with moving the clock for fifteen minutes every week instead of an hour once. It should go better. Tomorrow I will wake up at 5 on the dot, then I’ll make it 4.45 about ten days later and the day before daylight savings time starts I will switch my alarm back to 5.30 which will be the old 4.30.

Today we’re back to teaching, I have a long list of things I need to get done, I will look at my social media accounts for about half an hour, want to record the podcast early this week because I’m hoping that that will be less stressful and also I want to go running and do strength training.