So that was an extraordinarily unproductive day. Hmpf.

I did get enough sleep and then thought it would be a great idea to not write first thing. I read instead. And that set the tone for the rest of the day.

I had a really nice, leisurely morning and read „Barking up the wrong tree“ for hours. (Despite the title this is non-fiction. Ironically it is about what really makes people successful.)

There was breakfast. Then I started a new sock while my husband showed up for his breakfast. Since this was a pattern I have made about half a dozen times before I thought starting it would be easy but I hadn’t accounted for Cat Bordhi’s fiendishly complicated instructions. Well, the instructions aren’t all that complicated but the „New Pathways for Sock Knitters“-book has you go to one page for the toe and to another one for the cast-on and then you need to find out all your respective numbers for each. It didn’t help that I am doing a toe-up sock which means fiddling around with magic loop in the beginning and that always makes me extra-cranky. I keep thinking that I’d like having a circular needle for a mindless sock that is meant to be carried around but then I realize every time that I really, really prefer dpns. Only not for the start of a toe-up sock.

My husband was a little taken aback by my lack of attention which I totally get. Also, he is in overwhelm mode again. Since he started to clean up the mold next to the kitchen cupboard and things are taking longer than anticipated (they always do, by the way) and he hadn’t been able to put the spinach seeds in on time everything felt like it was doomed.

I had an extra slow morning where I didn’t get moving for ages and also forgot that I had planned to go grocery shopping. There were our plans to go to the hardware store in the afternoon and I had a student coming.

Well. The student canceled. My husband was equally late in starting lunch so I helped him a bit and decided to go grocery shopping after all. I asked the boy to help me because this was one of those epic grocery hauls and he was nice enough to tear himself away from playing Minecraft.

We bought all the groceries. Then we carried them back home. Where we were late for lunch. Lunch was good, though: 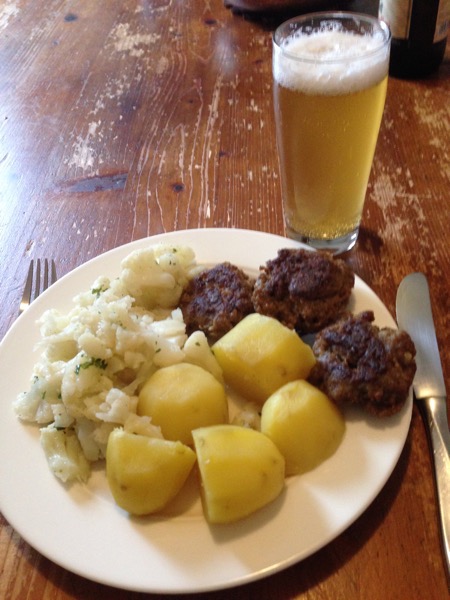 I spent the rest of the day talking to my husband, deciding that we wouldn’t go to the hardware store after all, trying to make myself do something, hung up two loads of laundry, folded half a load, did the dishes, and put the groceries away. Not in that order.

I also made really good progress on „Ocarina of Time“. I might want to rethink my rule for video games.

And I’m halfway through the Eric Barker book.

Then I did strength training with the boy and we watched something on TV and I declared the day done. Okay, I already did that around 3 in the afternoon. Still.

I am really hoping to do better today, there will be the hardware store (don’t laugh), cleaning, going out for lunch (probably), more kitchen wall scrubbing (probably) and I hope to get some other things in there as well. Maybe not as much playing of video games.