I woke up too early after a restless night.

After the slow start into the week on Monday I was rather motivated to get a move on and managed to write both before and after breakfast. That was very good. There were Krapfen for breakfast again. They were delicious, these ones better than the ones the day before, but now it’s enough of this. I’m looking forward to having muesli again: 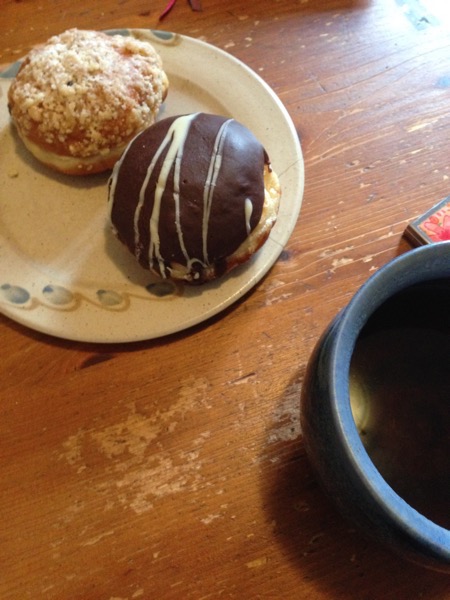 One with poppy seeds and one with chocolate. Not at all traditional but I was so late at the bakery that all the regular flavors were gone. Had a very pleasant morning withy husband and the boy.

The boy went off at 10.30 with a friend to practice English conversation. The boy only went because his friend asked him to but it turned out that the woman tutoring them was rather nice and they learned a lot. They’ll do it again next week, apparently.

Then I decided to skip my 3.2 k run because it was so windy. My husband said that people were advised to stay indoors. So I did. Because that meant I had more time I was all excited to write some more only to find myself checking e-mail and fiddling around with the budget. So now I understand how the new YNAB handles credit cards but that didn’t make my novel go forward.

Since we had watched the first episode of „Salt, Fat, Acid, Heat“ the night before my husband felt moved to make spaghetti bolognese: 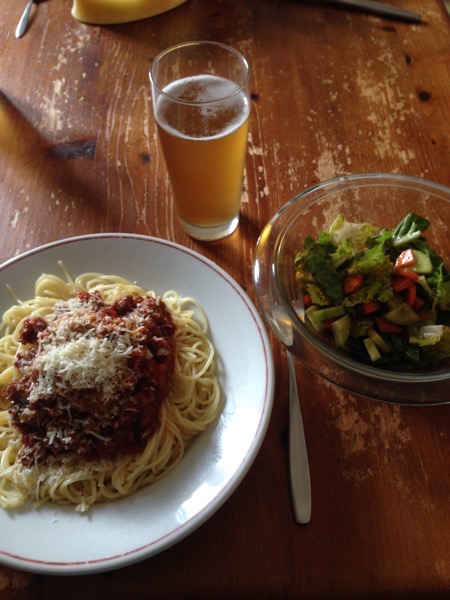 I wasn’t all that hungry. Might have had something to do with all the baked goods.

I had great plans for the afternoon, wanted to write some more, practice, sew, work on the book cover design course, teach a student and do strength training.

In the end I read a lot (I’m halfway through book #3 in the Brooklyn Bruisers series. I also own the next two books and am expecting to finish those before the end of the week.), played „Legen of Zelda: Ocarina of Time“ for an hour, felt terrible, filed a lot of recipes into a binder my husband had started, felt terrible some more, sang a little, finished the part of the book cover design course that I had wanted to finish weeks ago, taught my student, did my twenty minutes of strength training with the boy, and watched the second episode of „Salt, Fat, Acid, Heat“ with my family.

I also spent some time looking for more and better books on productivity for writers and downloaded one through Kindle Unlimited. Because clearly, my problem is that I really need the right hack to get it right. This has nothing to do with the fact that I’d feel a million times better if I had just kicked myself in the behind and had sat down and written some more.

The absolute highlight of my day, though, was the minute I got the mail. Because I got a real, live handwritten letter from Eliandhra! She will be mostly offline next month as well, and it seem that she saw that as an opportunity to go all analog with communication. I really loved it. It was just the kind of stuff you’d usually put into an e-mail but it totally made my day.

So I guess I’ll go and root around in a drawer to see if I still have some suitable stationary hanging around and will write a letter back today.

Other than that there will be running and writing and a trip to the hardware store and a dentist visit with the boy.