Woke up early, slightly before the alarm after having gotten enough sleep for the third night in a row. Wow.

It took some time to make me start writing but when I did I was on a roll. Only a few hundred words first thing, then breakfast.

My husband showed up early because he had a student at 9 in the morning. That gave me some time to write because I was still set on finishing novel 2.

I procrastinated like a champ, finally got writing and then didn’t want to stop at all. 70 minutes later I had finished the epic showdown at the end of the story and finally tackled the dishes.

Had to skip cross training and cleaning. I did try to get the printer running again with a set of cleaning cartridges. Let’s say it was not totally in vain. On the other hand if we want to print something in color it better won’t have any magenta in it. I’ll try again today.

I also changed the cartridge in the BRITA filter. So, for a while I was going back and forth between the kitchen and the annex. Starting the next step of the process, walk over to the other room, check if I can start the next step, rinse, repeat.

Then it was time to get ready to go out for lunch which also meant transferring all my stuff from the backpack that I use when I go shopping to a purse. Or in this case a messenger bag.

We walked to the Greek restaurant and met the boy there. The waiters were rather generous with the ouzo, the boy got one as well which he didn’t drink.

The food was good (it’s not the best Greek food in town but it is nice and the nearest to our house): 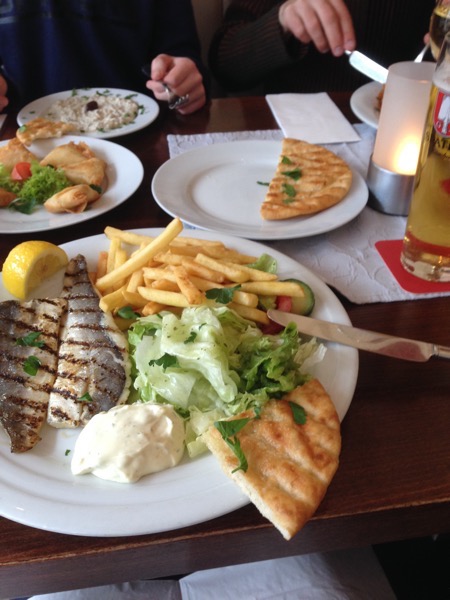 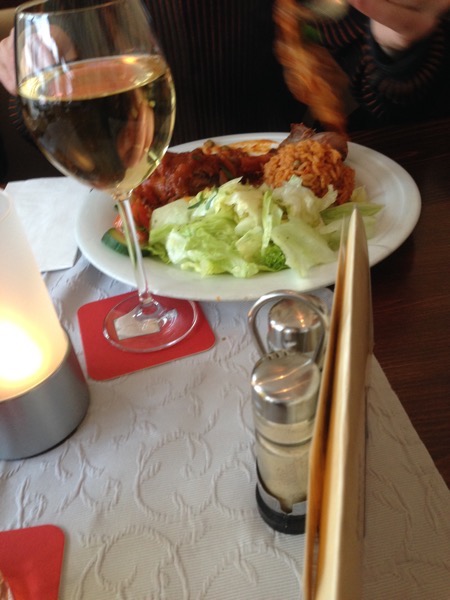 I really longed to finish writing that novel but there was no time left in the day. Also, writing 4,200 words in the morning left me with slightly achey hands.

I read a bit and sang a bit and was happy that the last part of the blanket CAL was out. Then I taught all the students. And had fun doing it.

Then the boy and I watched „Star Trek: First Contact“ which is excellent.

I did not manage to write after that, it was already a little past my bedtime by then.

Today there will be running and maybe sewing and my husband and I will go out to see one of those weird, improvisation concerts. Even though we feel like staying home.

I still have most of my to do-list from yesterday, I did not clean anything and there are a couple of other things on there. No idea when I’ll do those. Maybe I will have to clean instead of sew.