Funny how I was all set to write, write, write all day and then it didn’t quite work out and in the end I was okay with it.

Woke up from the alarm after something like eight hours of sleep straight through. Wonderful if a little disorienting.

Husband showed up at 8.30 again in a somewhat better mood. We did spend most of the morning talking which was rather nice.

Since the boy was having lunch with my mother-in-law and we still had some cress left we decided on potato salad. My husband was thinking bratwurst, I wanted eggs so we compromised and I went to the health food store for a second time this week. Also got an eggplant which will disappoint the boy. There is lasagna planned for the weekend and the boy likes it better without eggplant. Lunch was nice: 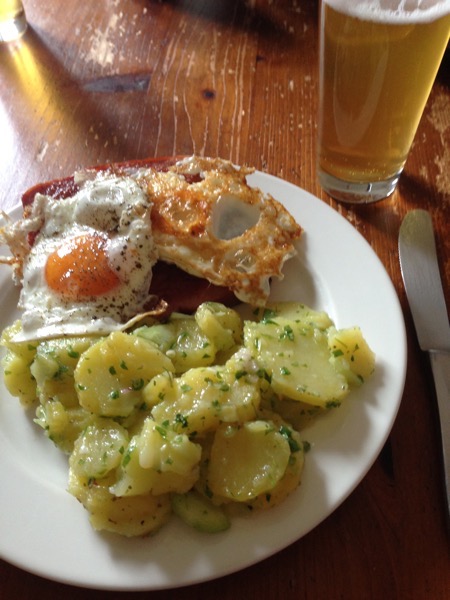 I spent quite a bit of time researching stuff on the internet that had nothing to do with any of my current projects and then I played some „Luigi’s Mansion 2“. I almost cleared the first level – I think – but died twice.

Then the boy came down from his lunch and started talking about school stuff. He needs to decide on all the classes for next year soon and was rather agitated about how complicated everything is and the kinds of classes he needs to take. I asked him about the seminars he had had to decide on at the beginning of the year and it turned out that he got the two he wanted and thought he had already told me.

Then I made very little music and did some more research and taught a couple of students. I really love it that my current singing students encompass the range from ‚Systems of a Down‘ to the ‚Red Hot Chili Peppers‘ to ‚Roberta Flack‘ to ‚Adele‘. I’m usually not much for Adele but I do like „Make You Feel My Love“. I was not surprised much when reading that it’s a Bob Dylan song originally.

Then the boy and I did some strength training, the boy fried himself some eggs for dinner (with a little help), I kicked myself in the butt and wrote some words and I managed to go to bed on time again. Win!

Today there will be cleaning and cross training and a family outing with Greek food for lunch and then quite a bit of teaching and if everything goes according to plan I will be able to celebrate the finishing of novel 2 by the end of the day.

No matter how that goes I am planning to watch some Star Trek.