I managed to wast about an hour after waking up with no great effort. I’m really hoping to get back into my groove soon.

There was all the usual and then my husband had a great need to talk about some friend stuff.

Two hours later he went running and I started cleaning.

I did go walking for half an hour, so at least I’m on track with the exercise for the week.

I came back and helped to make pizza. Which was rather good: 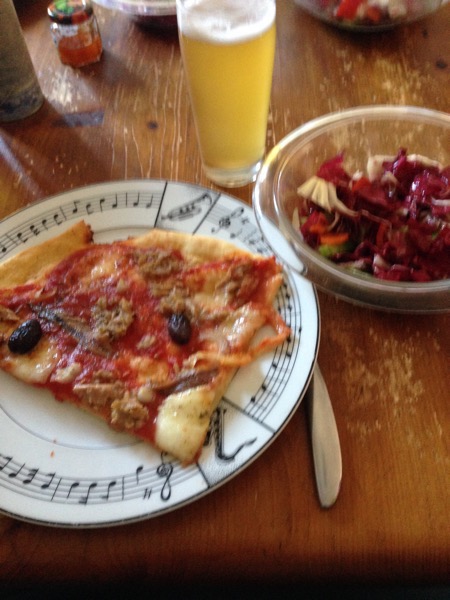 I took a picture of the crochet blanket. I really wanted to get some writing in but no luck. After lunch I did the dishes and then – instead of making music or working on the podcast – I talked with the boy about learning strategies and teenage stuff. Also linear algebra. As one does. (No, I don’t really know what that is, either. I guess I learned about it in school? Not quite sure, though.)

Then there was teaching. And then I worked on the podcast some more and started uploading the video. Then more teaching. Since I decided to put more energy into teaching I have started to not only have more fun but also I have stopped looking on the clock all the time. I like it. My last student of the day has a combined ukulele/piano lesson and I spent so much time pulling out ukulele songs that would be fun to play that we had to scramble to squeeze the piano in. We had started ten minutes early and went until the regular time.

Then the boy and I watched “Star Trek: Generations“ while eating leftover pizza. I finished knitting the Dalek hat for him and now it is a little too long. Which means he can fold the brim over which will make the hat a little warmer. So that’s good.

Then I had to wait ages until he was done with taking a shower which made me slightly late for bed yet again.

Today I want to run and write and sew and maybe practice. And publish the podcast. And go to bed early.