Woke up early, dawdled a bit but managed to meditate and touch base with the novel before breakfast. Seems we are actually having a new morning routine now. We’ll see how it translates into weekends over the long run.

My husband started fiddling with his new guitar right after breakfast and I started crocheting the next part of the Sweet Pea CAL blanket. I’m a little sad that it will be two weeks until we get the next part of the pattern but then that will give me time to work on the Dalek hat.

I had wanted to write some more late morning but instead played games on my iPad. I was just so tired.

Did manage to clean the house and make pizza only a little late: 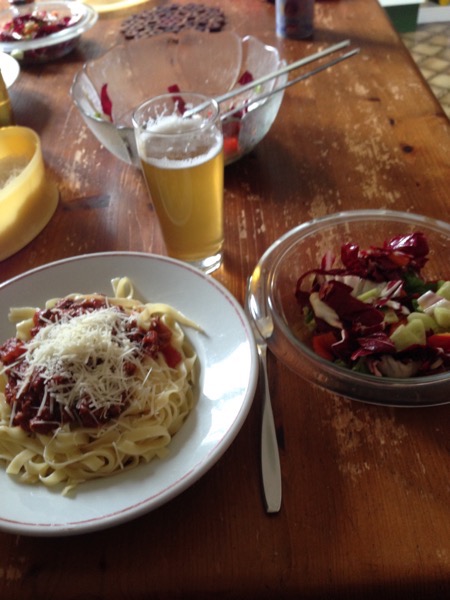 My husband made the red beet salad for us. He met a friend for Greek food leaving us behind. Pizza was rather good and I think after making the exact same dough for years now I’m finally getting the hang of it. Note to self: use the rolling pin it makes things much easier.

Then I did the dishes and only had a little time before teaching. There was a one hour break between students that I used to work a little more on the book cover design course. I’m right at the beginning, still, where you set up your workspace and finding out how to do things in Affinity Photo does take quite a bit of time. Interestingly it is much easier to use than GIMP.

Then I met a new singing student and she was delightful. Am looking forward to work with her.

Then the boy and I watched a little TV and then I went off to bed even though I hadn’t written enough words yet.

So I’m hoping for more writing today and some running and the usual stuff and then I’ll force myself to pull out the sewing machine again.