Woke up ten minutes before the alarm and didn’t anything useful until I rolled out of bed a little too late to make breakfast.

No meditation, no classical music, nothing.

Made breakfast and ate it with the boy. My husband showed up at 8.30. Before then I started setting up my bullet journal for February and migrating the things from the old journal that I still want to keep in the new one.

And I listened to the podcast and wrote the show notes. And found that there is an issue with the sound quality. Nothing I can do anything about. It seems to be a computer issue, not something to do with the new microphone. But still.

I finished part four of the Sweet Pea blanket and started part five. And I cast on for a new hat for the boy but didn’t get far.

Then dishes and cleaning and such.

And then we made lunch. No pizza this week: 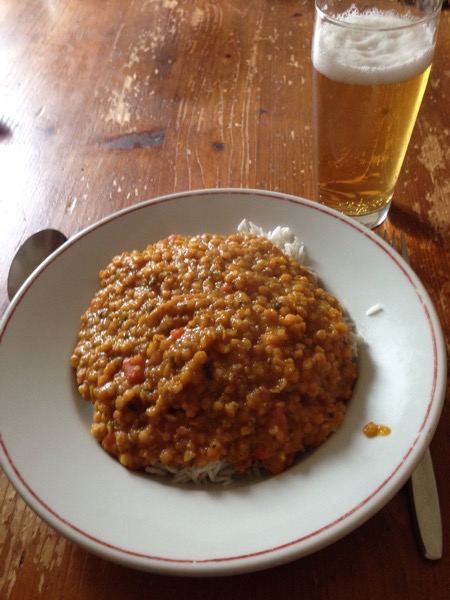 Then I worked some more on the podcast, did some dishes, practiced a bit and taught all the students. The potential new student became a new student.

Then I had planned to do strength training with the boy but he had received his new speakers and had tried connecting them to his computer and had run into problems. The cable we ordered was configured in a way that he could only connect one speaker. And that one made weird noises every time he moved the mouse or did anything on the computer.

So that won’t do. We’ll have to send the cable back and get another one.

So we skipped strength training because of the time and watched an episode of “Deep Space Nine“. A very good episode.

Then I got ready for bed almost immediately and didn’t work on anything for the rest of the evening.

I’m hoping for slightly better results today. I’ll get the podcast ready for publishing and publish it, and I’ll go for a run and I’ll write and make a little music and cut out the fabric for a pair of yoga pants.