I woke up five minutes before the alarm but was handicapped all day by going to bed at midnight. So yesterday was basically doomed.

My husband showed up at 6.45 on the dot to get the fire going and make tea and coffee in time for the boy’s breakfast about half an hour later. I didn’t get anything done but I did meditate before then and crocheted some more stripes on the blanket.

Breakfast was had. My husband and I talked a lot. I almost decided to take a mid-morning nap. I went grocery shopping. The list looked manageable but when I was loading everything into the one backpack and two huge bags I had taken I found that the groceries were rather heavy. My hands hurt when I got back home from carrying the bags.

Meanwhile my husband had made lunch and it was wonderful: 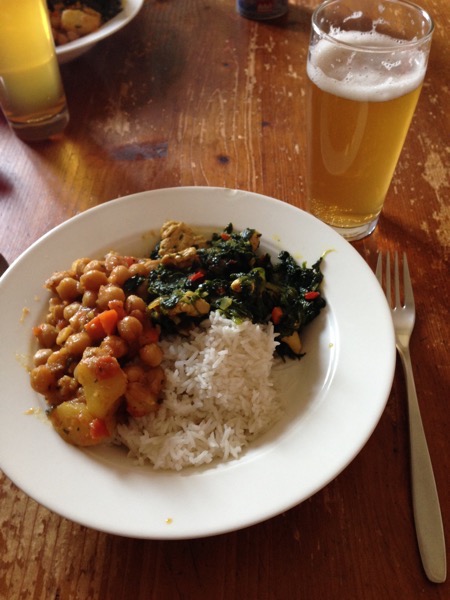 The boy showed up, said hello, told us about two tests he had gotten back (excellent physics test, not so excellent but fortunately not disastrous Latin test) and showed us some drawings he had done in school. (If only the teachers would let him all draw in class he would pay so much better attention. Alas.) And then he was off to have lunch with his grandmother.

Then I went into a really deep afternoon slump, found that my trial copy of Affinity Photo had expired, bought the full version because I think I like it better than GIMP and it should be able to do everything I really need, played some games on my iPad and went teaching.

The boy went to the orthodontist and we decided to move his piano lesson to the evening, my last student called that he’d be late, so the boy and I had really late piano-playing and then some strength training.

Today there will be cleaning and loads of teaching and maybe pizza and another webinar by the wonderfully helpful and insightful Jessica Abel that I heartily recommend.

There might be some watching of Star Trek or not, we’ll see.

Why yes, I have no idea where to squeeze in all my projects as well.