Basically, the whole day was a big, fat slump but I’m okay with that.

I woke up from the alarm, spent time on the internet and before I even got out of bed my husband showed up. He started the fire and it took the usual 50 minutes until tea and coffee was ready for breakfast, so that we could start celebrating his birthday: 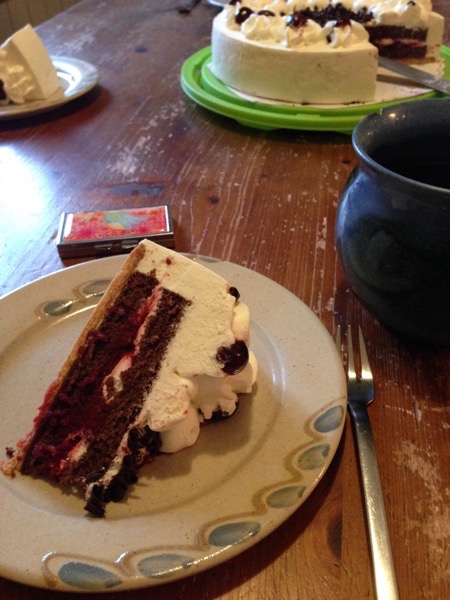 He didn’t get any presents from me but the boy drew him a pretty good Les Paul custom (electrical guitar that is my husband’s favorite one), his mother gave him a garden book, a bottle of wine and some money and my sister gave him an LP that he really loved.

Then we waited for the boy to show up for breakfast and as usual the boy was late.

I crocheted and read and looked at the ‚buy later‘-collection on my ebook reader. I might have deleted about a hundred books from that. I think I’ll find new books that I’m interested in if I really need them without having this obligation from my former self hanging over my head. I did start this list to prevent myself from buying all the books all the time.

Since I already own enough books to last me for a year without buying anything new, I don’t really need those books weighing me down on top of it. I still would love to do a ‚year of not buying books‘ but I already failed at that twice and there always pops something up that I feel I urgently need right now.

Now, I’m no longer all enamored with every single book in my ‚to read‘-list but a lot of those still sound wonderful. So I’m trying to work my way through the list. And to finish reading the books I started. Or to consciously abandon them. That would be okay as well.

But forcing myself into a ‚no buying at all‘-corset will probably not work at all.

And on top of it all I want to participate in the Gail Carriger read-along on Goodreads which means re-reading books instead of reading new ones. And I have a hard time fitting the current urban fantasy series that I’m reading around the „Finishing School“-re-reads.

Then we had a glass of champagne to celebrate and after that (and after chiding the boy for being way late yet again) we walked to the really nice Greek restaurant in town and had lunch.

It was fabulous but I forgot to take pictures. Sorry about that. My husband had lamb and I took the souvlaki gemista and the boy had zucchini burgers. We did not eat dessert and walked back through the cold.

Then I succumbed to the slump. A glass of champagne plus one ouzo plus a glass of wine might do that to you. I downloaded a new game on my iPad and spent most of the afternoon playing that. I’m still not sure I like it but I can’t seem to stop playing it. (Which might be a sign that I actually should stop. We’ll see.)

When I asked the boy what he does when he has a game that he doesn’t really like but can’t stop playing he said that he just plays it until he gets bored or stuck and then he stops. I’m not sure that that’s the best tactic.

The boy and I did watch some Star Trek and I did some more crochet and that was it for the day.

Today is Monday again, which I love. There will be running or something similar and very few students but one potential new student which is exciting.

I also might have a long list of things that I wanted to do on the weekend. We’ll see how that goes.