And that’s quite the achievement.

When I woke up around five I decided that I really needed more sleep and just turned over and slept some more. Until five minutes before the alarm which is just perfect. (Yes, my alarm goes off on weekends too, I’m trying to maintain a regular sleep schedule here. For health and happiness reasons.)

I wrote morning pages and while I was sitting there with my earphones listening to Steve Reich’s „Electric Counterpoint” (I really, really love Steve Reich.) my husband must have sneaked in and started the fire.

So there was breakfast and conversation and crochet. And then we decided to not go running at the same time because my husband was expecting a package. And he told me to go and write for a bit. And I tried but every, single time that I gathered my thoughts and was about to start writing there he was again, with a question, or a comment or something. Three times.

Then I gave up and started watching the book cover design course. I want to work through it again (the good one by Stuart Bache) actually doing the book covers along with him. Today was only listening and watching, though.

The boy showed up for breakfast. The mail man showed up with a stack of five huge parcels. One, small one, for us, three for various neighbors and another one that he did not leave with us.

When it was time for running I could not be bothered (it’s still a little slippery but that’s not enough of an excuse, really) and decided to go walking instead. The good thing is that my usual round, the one that used to take me 45 minutes now takes only 38. The bad thing about this is that walking is not quite as much exercise as running. Still.

I helped making paella. It was rather yummy: 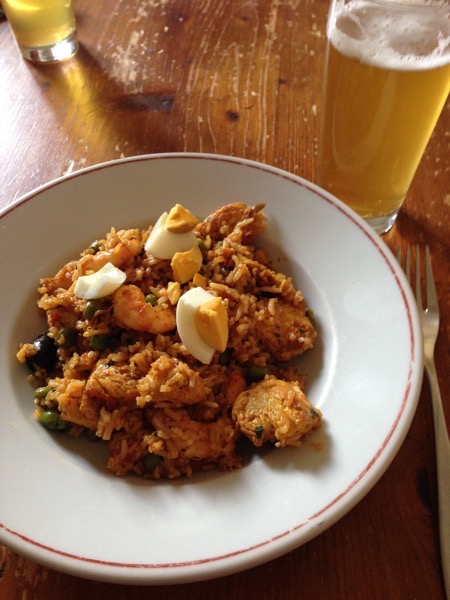 Then I sat and read and ate chocolate and was somewhat afraid of slothing away the rest of the day but then I did manage to pull myself together somewhat. I managed to publish the podcast even though I mostly couldn’t access my website, did the lunch dishes and cut the yoga pants pattern out: 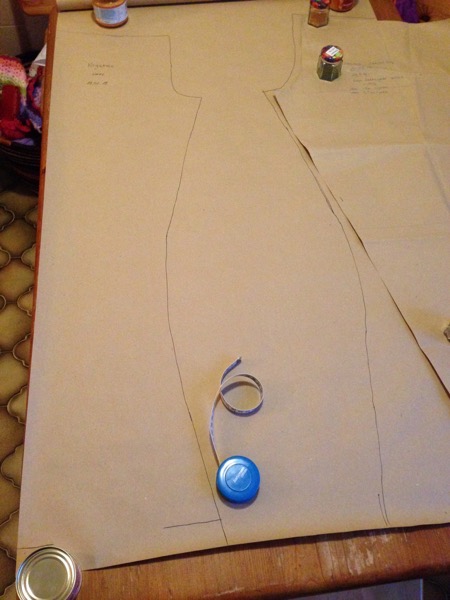 In the end I just took my self-drafted leggings pattern and guesstimated how to change it to make yoga pants: 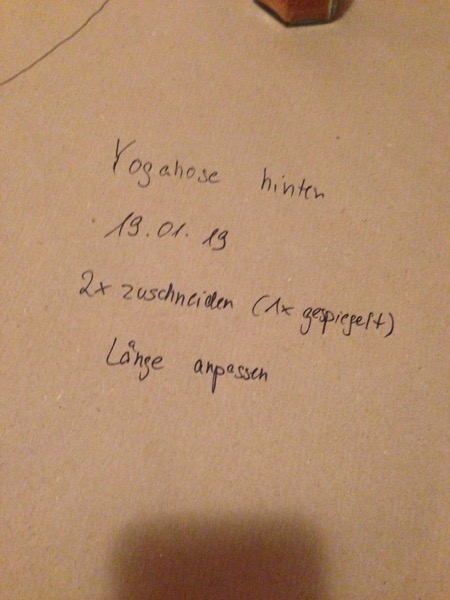 That says, „yoga pants back“, the date, „cut two, one mirrored, adjust length“.

Then I finally took a shower, watched the sixth Star Trek movie with the boy while crocheting, got ready for bed, wrote a few words and turned off the lights.

Today will be my husband’s birthday. He didn’t want any presents. There will be cake for breakfast and we’ll go out for lunch and I guess that will mostly be it for the day. At least it will be rather relaxing…