I’ve been thinking about motivation and priorities again (yeah, I know) because I watched Chris Fox’ video about it. Basically he says that a) you can only have one priority and b) if someone would give you 100,000 dollars if you wrote 5,000 words each day for the next 30 days, a lot of us (and certainly most writers) would sit down and somehow get 5,000 words done.

I mean, I already know that I’m making all kinds of excuses but that brought it home for me big time. So, I woke up around 5.30, skipped the morning pages and wrote 900 words almost first thing. And then I was all happy, bubbly and motivated for the day.

Found out that I’ll be out of thyroid meds after Sunday but wrote an email to renew my prescription. Which means taking the train to the next town over, probably on Friday.

Did all the usual things, even had a kind of meeting with my husband where we talked about his projects and his workload. He is having more students again and certainly more than I which means we need to shift chores around again. Then we talked about our teaching website and had a nice one-hour fight. Of course, it was all a misunderstanding and so we kept talking and everything is fine again.

I did the dishes and went running: 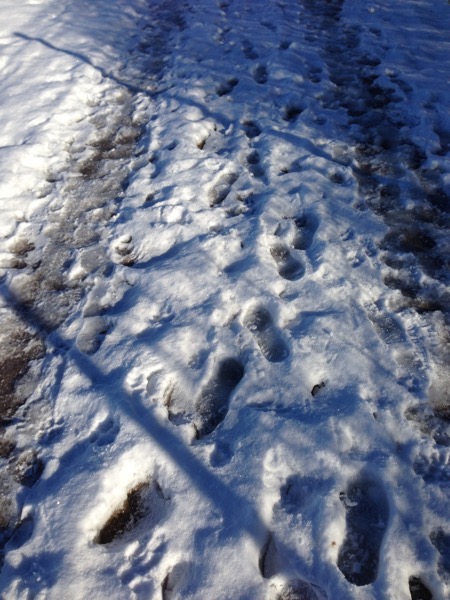 Well, I say running but I was actually mostly walking. The ground was frozen and one could choose between very slippery ice or very hard, crunchy, frozen snow. The weather was gorgeous, though, and I had a ton of fun. 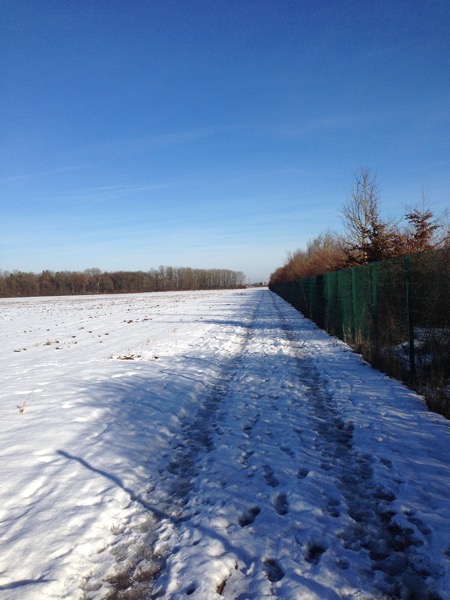 I met my husband at the point in the picture above and we ended up walking back home together. Well, he ran the last bit but I was content just walking. 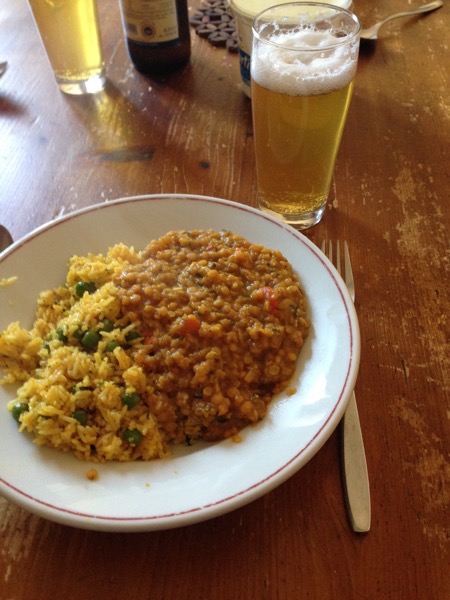 Yummy but a bit too much for me. And rather spicy.

I prepared the podcast, then thought that I had it wrong and that next week was podcast week, then found I had been right the first time.

And then I saw that there was a message on voicemail. That turned out to be someone from a German knitting magazine who wanted to talk to me about my podcast. Exciting! And a little scary.

I got myself ready for teaching and then tried to call her back for thirty minutes. When I finally reached her we had a rather nice chat. A chat that made me realize how awkward this here blog is to navigate, so for those of you interested in the podcast – there is now a handy link to the podcast category at the top of the blog.

I did promise her a picture of me knitting and thought I’d just take that right away because the light was okay-ish and I still had thirty minutes before my first student.

Finding a suitable location proved to be difficult because all the plush chairs in the house are sitting in places that are exceptionally dark and cluttered. So I decided to fake it and use my piano as a backdrop. I fetched my knitting, only to find that there was no knitting to be done because I need to pick up stitches for the Owligan’s button bands first. So I fetched a sock.

Then I couldn’t remember how to work the remote for my camera. Then the battery on the remote was dead. Then I took a few pictures, realized that there was a bit fat reflection of the window in the piano. Then the camera’s battery died. (I had a spare.) Then I tried different angles a little frantically because I was running out of time and I realized that my contingency plan of taking pictures later today would not work because it is supposed to rain. Which means no light. (I really need some lighting for taking pictures and video. I should put that on my birthday list.)

I think I have one or two pictures that will worked when cropped. Note to self: when you take pictures in front of the piano you better remove all the crap that sits on top of it.

Phew. I still need to do the cropping and to send the picture out.

Then I taught non-stop until dinnertime. My last student showed up and I was so preoccupied and then concerned with her tuner not working that it took me ten minutes to realize that instead of the dingy, old, cheap guitar she had been using ever since she started she had brought a nice, shiny, big, new guitar. With steel strings.

A very nice guitar at that. I found myself grinning through the whole lesson because I was so happy for her.

I have to say I was a bit wrung out emotionally after that.

At least the webinar didn’t start until 9 pm.

I made the boy play piano, helped with dinner, started writing this post, got ready for bed and finally watched a bit of the webinar. Long day.

Today there will be grocery shopping and podcast recording and a late teaching day and strength training. I’m also hoping to start getting the podcast ready. Bonus points for writing fiction.