Why yes, I’m sensing a theme as well.

Woke up from the alarm and had a very leisurely morning. Since my husband’s friend was here until midnight or so nobody disturbed my sacred solitary morning until after eight or so. Of course I had made sure to meditate and read and listen to Clara Schumann before then. (That was the daily piece of classical music, her three romances for piano and violin op.22. Unfortunately the Spotify playlist had a version for clarinet and piano that I didn’t like as much but then I listened to the whole thing on youtube. Ah. Wonderful.)

There was breakfast and knitting and crochet and a bit of knitting. I had bought yet another book about being a professional writer and since it was a short book I read it all through in a mere day. I found it helpful if short.

Then I did my usual Sunday morning yoga. It is starting to become routine which is very good. There was fennel and polenta for lunch. Very, very good: 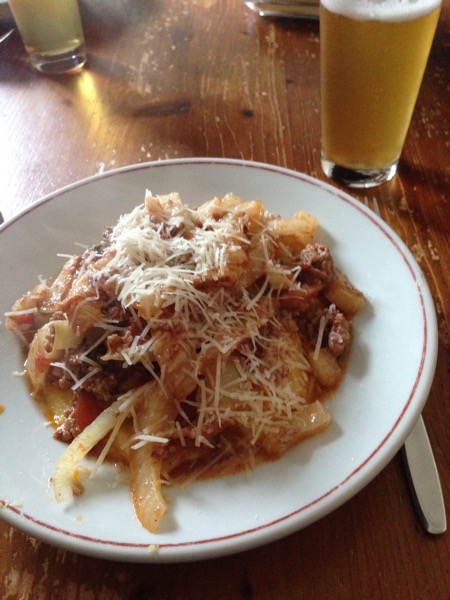 And then I had high hopes of writing all afternoon to catch up. I had a great plan involving the boy who said that he had a ton of homework that he didn’t want to do. So we decided to meet at 2 in the kitchen and do pomodoros.

But first we talked for an hour about which science courses he should take at school next year. He has to choose now for the next two years until he finishes school. He’d love to take three science classes but he is only allowed two. Physics is a given but he can’t really decide between chemistry and IT. Now, IT is what he might end up studying later and he thinks the other students in that class might be the right kind of nerd for him but he has no idea what grades he’d get (hasn’t written a test yet in IT) and he will probably have the teacher he doesn’t get along with. Chemistry is something that interests him as well but not as much, he has been getting great grades so far but he thinks his fellow students might no be his kind of people. Also, physics plus chemistry seems to be rather unusual, there will be loads of students taking biology plus chemistry and some who take physics and IT. Dilemma.

On the other hand he will probably be fine however he chooses. I think he’ll be able to get good grades in IT as well and might be able to work through his boredom. If he doesn’t take IT he will certainly be able to learn the required material on his own before going to university.

Then I finally was able to start the pomodoro timer and write for 25 minutes. Which gave me 1,000 words.

And then he started asking me about help with other school stuff. There are other courses he has to choose and for those he had to write about special skills of his regarding those projects. That took another hour.

After that my head was full of everything but my story so I resorted to playing Candy Crush and reading Ravelry.

Then my husband showed up telling us that ski jumping would be taking longer than anticipated so we decided not to watch anything. (Only one TV in the house.) We had dinner. And chocolate.

Then ski jumping was over and we decided to watch and episode of “Star Trek: Voyager” after all. I made some progress on the crochet blanket.

After that I started writing this post, wrote in my journal, looked at the upcoming week and planned out what I could, wrote some more words, brushed my teeth and turned off the lights.

Today there will be running (I hope, I’ll have to see if I can wear my shoes by now.), and maybe a microphone test, and the wrapping of a present, and maybe the drawing of the yoga pants pattern. Bonus points for watching Stuart Bache’s book cover design course again and follow along with recreating the covers he designs in the course. I’m thinking about watching the course on the iPad while working in GIMP on the computer because switching back and forth between the browser and GIMP is no fun. I could do split screen but GIMP doesn’t really understand it and my laptop screen is so small that split screen results in not being able to see anything properly. Those are the times when I dream of a big-ass monitor.

And now that I’m typing this I’m thinking that maybe I should hook up the laptop to the TV screen and use two monitors. Hm. That might work. Cozy setup, working in a plush chair with my feet up.

I see some testing in my future…