Woke up early again, wrote morning pages, meditated and listened to the daily piece of classical music. I had expected to like the Mendelssohn octet more than I did. Maybe I should give it another chance.

My husband got up super-early again so we could make breakfast on the wood stove and then I went out and did a rather sloppy round of snow-shoveling.

Breakfast was had. I read a bit and I crocheted a bit. The boy showed up for breakfast.

When donning shoes and going outside I had found that the nick on my heel from the cupboard falling on me the day before while I was vacuuming chafed when I was wearing shoes and walking. So I decided to not only skip running but also the spinning meeting. I wanted that heel to heal quickly so I can go running again. In my nice new running shoes.

Which meant that I had an unexpected day off. And I enjoyed it very much.

My husband and the boy did some world-class shoveling while I did the dishes and changed the sheets on my bed, and then we had leftover lasagna for lunch: 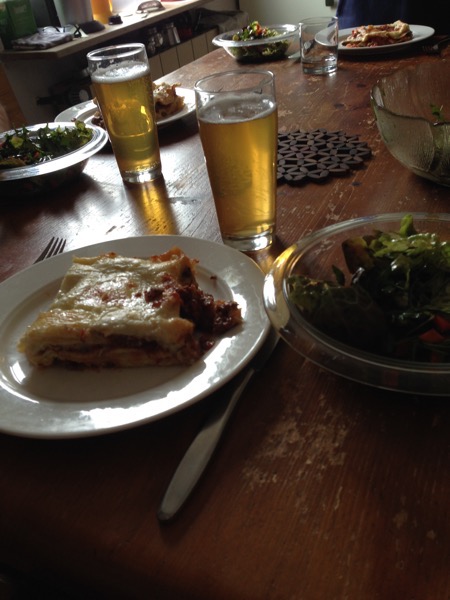 Laundry, dishes, and I finished watching the book cover design course on Udemy. I was very glad about that. While I did learn some things about doing book covers with GIMP that will come in handy the covers the instructor designed were just, um, not to my taste. At all.

Next up everybody can make fun of me when my delicate taste won’t prevent me making awful covers as well.

My husband had a friend over who brought a bottle of wine so we all tried some. This is one of the exceptions to our January without alcohol.

The boy and I did some strength training (no shoes required so I could do those without hurting my heel) and then settled down to watch the fifth Star Trek movie. I can’t quite decide if this one is the worst or the first one but I thought it would be a good idea to have the boy see it for educational purposes.

Of course I had had planned to do all the writing in the afternoon but then couldn’t be bothered again. Maybe I need a more exciting writing project but then I’m basically at the middle of the middle, as in the middle of the second novel in a trilogy. And everybody knows that the middle is always a slog. Which is a good reason to proceed with speed. Ahem.

I did manage to write a word or two before going to bed on time, though.

Today I have the usual plans, there will be more snow-shoveling, some writing, maybe I’ll draft the yoga pants pattern and I want to do yoga. Also, we’ll be eagerly awaiting the verdict of snow day on Monday or not.