I woke up rather early again, before 5, but managed to doze a bit after that. Until 5.20. Wrote morning pages, wrote on the novel for half an hour, meditated for five minutes and listened to the first movement of the Max Bruch violin concerto. Very good start into the day I’d say.

My husband showed up at 7.30 again, just when I was sitting down for breakfast. As usual it took about an hour until his breakfast was ready, including the fire in the wood stove.

I crocheted while waiting for the boy to show up. He was rather late because he was already dreading the start of school today, of course. I finished the first part of the Sweet Pea blanket: 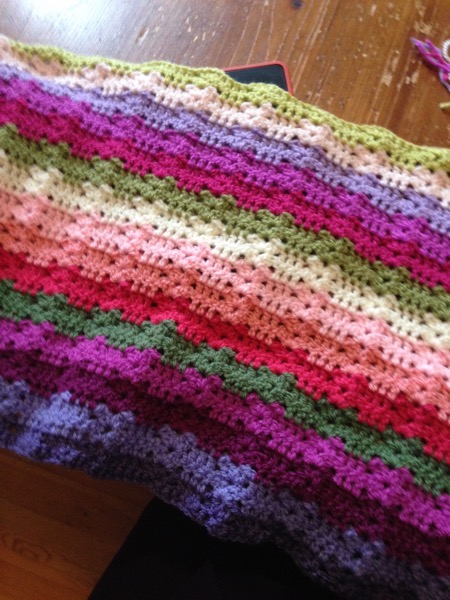 It is rather nice. Very cheerful and warm. 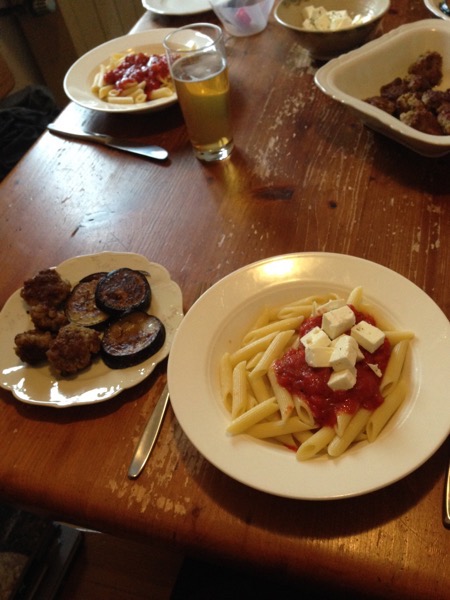 Spaghetti arrabbiata with feta cheese, lamb burgers and fried eggplant. Let’s call it Mediterranen cuisine… It was really good, though.

Then I got the podcast ready for publishing it. I found that the MP3 files that went missing had been saved in a weird spot under a wrong name somehow. iTunes has been thinking that each episode of the podcast is episode 7a for years now, and it seems that the rest of the computer is now thinking the same. And is saving them in a folder that has nothing to do with music and recordings and such. I hope I can change that back but at least now I know what happened. Only not why.

So that took some time but it was alright because I had written some more of the novel right after lunch. Very good. And the novel took an unexpected turn which is always fun to write.

Then I finally uploaded the podcast, announced it on all channels, then finished the weekly cleaning, did some yoga and then it would have been time for watching Star Trek but my husband was still in front of TV with ski jumping going on. So the boy and I had dinner, then we watched an excellent episode of „Deep Space Nine“ (it was „Little Green Men“ for those who like to keep track), then then boy took a shower, I did all the dishes (I had actually forgotten the dishes after lunch) and went to bed.

Today the boy will get back to school and we will get back to teaching. Monday is a rather light teaching day so I’m hoping to get some other things done as well. We’ll see. I will have to wait until the end of the week for the next part of the crochet blanket pattern but it will be great fun to dive back in then.