Woke up, wrote morning pages, read stuff on the internet. My husband showed up around 7.30 again. Seems to become the new normal. I was prepared and had meditated even before leaving the bed, ha!

Breakfast. I made the mistake of talking about the bullet journal and project planning again which my husband doesn’t like first thing in the morning. Hilarity ensued.

The plan had been to go running but I was rather overwhelmed by all the stuff I hadn’t done the day before and it was snowing a lot so we shoveled snow for a bit, I did the breakfast dishes and then started to do the weekly cleaning. I got about halfway through before it was time to make pizza. Yummy! My husband decided to skip running as well because the snow was rather heavy and hard to shovel and that seemed enough exercise for the day. 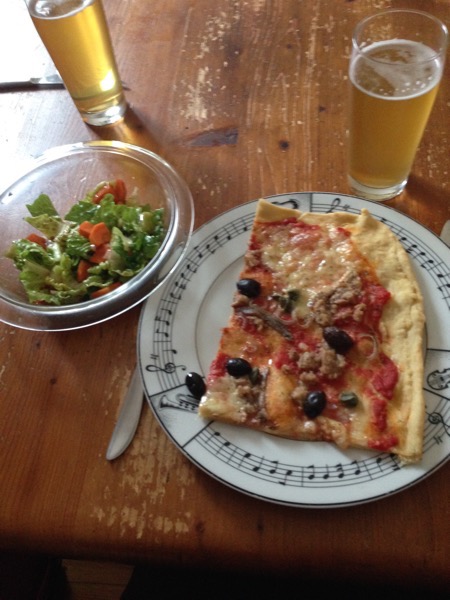 Then I took a break and a shower and crocheted a bit and then researched how to do a video call on my computer because I had plans to meet a friend for a virtual knitting meeting. That was really nice and we chatted all afternoon while knitting and crocheting and showing each other our blankets. I have to say I’m making good progress on the crochet blanket but then I already spent two afternoons and two evenings on it, ahem.

There was more pizza for dinner, the boy and watched the fourth Star Trek movie and really enjoyed it even though it is basically one big plot hole with implausible pseudo-science. I have already warned the boy that the next one will be really bad but I think we need to watch it anyway.

And then it was already time to get ready for bed, so I did.

Don’t worry, I haven’t forgotten about the podcast, I have high hopes of publishing it later today. The only other things I want to do are a bit of yoga and some more Star Trek tonight. And that’s the end of Christmas break. We had made plans to do something about the kitchen cupboard but then my husband realized that there will be ski jumping to watch all afternoon. Important things always come first.

Speaking of important things, the first sticky on my kanban board has already fallen off the fridge twice and – I mislabeled all the writing tasks. So right now on my fridge I have stickies telling me to write the book I already finished. That will be easy, don’t you think?