So I woke up around five again which is really to early but wrote my morning pages right away and started writing for half an hour after only fifteen minutes of reading. Phew.

Got up and made breakfast because I was expecting my husband to show up early again. Which he did, only a little later than I had thought at around 7.30. It’s funny, him getting up that early really screws with our morning dynamic. And instead of shuffling around for an hour before being awake he is actually rather energetic in the mornings at the moment and has been seen wielding pen and paper to make a to do-list one day and consulting his calendar the other day. Strange.

I did manage to cut his hair as well before the boy was up.

I did manage to meditate for three whole minutes before my husband showed up again (I thought he would be away longer.) and listened to half the piece of classical music before the boy showed up. I’m still tweaking my new morning routine.

Then I sat around a bit and finished my newsletter (finally!), then did the dishes, and then we ent upstairs to deliver our birthday presents and talked with my mother-in-law which meant that my list of errands got quite a bit longer. I went to the fish shop, the bank, the Asian grocery store and the health food store.

Came back and immediately started making lunch together with my husband. Since we had invited my mother-in-law we had planned something she would like, fish baked in foil (so healthy! And light! Much better than fried! (Never mind the butter and the fatty fish.)) with tomato rice and fresh broccoli (So healthy! And no we didn’t tell her about the butter yet again.) It was delicious: 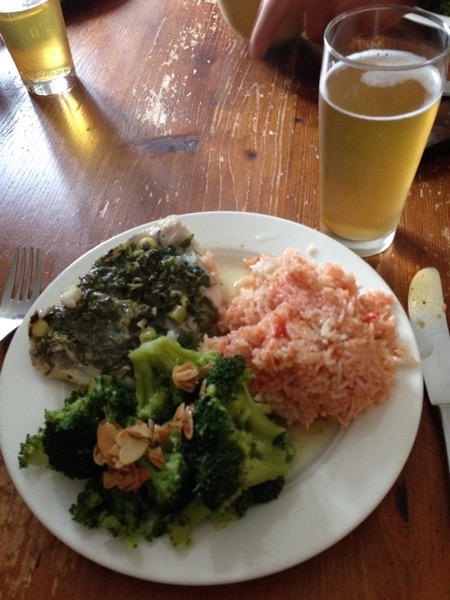 That’s cilantro on the fish. And I might have to add that I firmly believe that fat and butter are not unhealthy at all. On the contrary. But I have to laugh every time someone talks about fish being so light (those are usually the people who believe that eating low fat is good for you) and then they load a piece of salmon or tuna on their plate. That is some fatty fish. And yes, that really leaves you satisfied for a while.

The boy was pressed into shoveling snow, then, and after that he had to work on his English presentation with a friend. When I was seeing him again in the evening he was axing poetically about Google docs.

I did take a bit of a break and then I started the Sweet Pea blanket. I really love it but it took most of the afternoon to get the colors sorted and start the blanket. Then I took some pictures of my bullet journal because people had been going on about journaling taking so much time. I wanted to show them that you don’t need to draw pretty flowers and do elaborate stuff and calligraphy. A bullet journal can look like this: 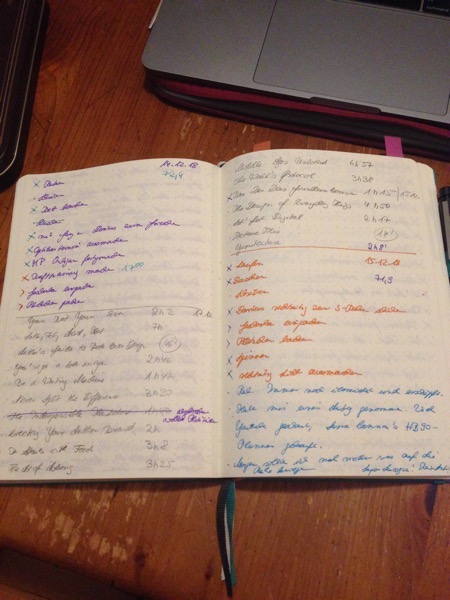 When you have a ton of fountain pens lying around the house and like to fill them with pretty colors. You can also take any pen or pencil that comes your way.

Then I finally did the lunch dishes, watched some Star Trek with the boy while crocheting on, finally started getting the podcast ready and then declared defeat. Note to self: don’t start a new crochet blanket on a day that has that many things to do.

I managed to turn the lights out in time but not much else.

Today there will be running, and somehow I need to get the podcast out the door. It seems show notes will be late this time. Well, only the show notes if we’re lucky. I’m also planning a virtual knitting meeting and to write all the words. I was really motivated yesterday. I did get 900 words in in that thirty minutes but I’d loved to write more than that. Again, we’ll see how that goes.