I woke up at five again which I didn’t like but I almost got enough sleep.

Wrote morning pages and lounged in bed until 7 when my husband showed up. He had gone to bed early the night before and had actually waited an hour before coming over for breakfast.

That thew us both a little, he built the fire and it took some time to boil the water for tea and coffee. So I ended up not meditating. I briefly thought about it right before lunch but then I forgot.

The boy got up late as usual and just after he had breakfast I pressed him into helping me buy groceries. Not that I really needed help but I had the distinct feeling that he needed to get out of the house.

We walked to the health food store, back home, then to the supermarket and back and then we had lunch. Which my husband cooked while we were away: 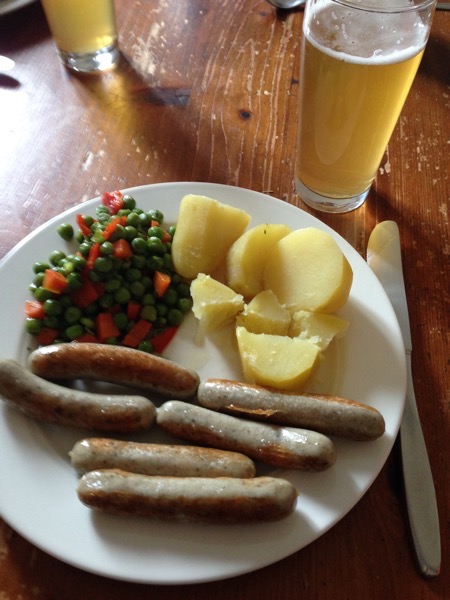 Then I had some chocolate and finally managed to prepare the podcast. And did the dishes. Put on makeup and got ready for recording the podcast. I tried the bluetooth earphones again and again had a lag between me speaking and the sound arriving at my ears. Nope. So I quickly went back to the earbuds with the cable.

I was pretty late with the recording and the lighting on the podcast is awful. I’m quite happy with the episode, though. Now I need to get it ready for publishing later today and then I’ll need to publish it tomorrow.

Then I helped the boy with printing out some stuff, he wanted a donor codicil because he is old enough by now and he also needed two forms printed out for school.

My husband is still lamenting his lack of contact with the boy so they decided to listen to some music together in the afternoon and I decided to join them. We listened to the first part of Mozart’s string quintet in G minor, Beethoven’s Great Fugue for string quartet and Webern’s saxophone quartet. True to form the boy liked the Webern best because it creates such a weird atmosphere. In a good way.

Which made my husband and me very happy because this piece is one we both really love. And I’ve told the story often but when we first met we bonded over this. Because very few people like listening to Webern and even fewer like this particular piece of music.

We did skip the strength training in favor of listening, by the way.

Then there was some Star Trek „Deep Space Nine“ while knitting and then some writing and then an early night.

Today is my mother-in-law’s birthday. Who came home from the hospital yesterday in the afternoon. Since our present for her is rather pitiful – she asked for a calendar and I put a box of chocolates with it – we decided to cook for her as well. So I’ll go grocery shopping again later today for fish and fresh broccoli and cilantro in three different shops.

I am very determined to also get the weekly cleaning done, the podcast ready and loads of words in. Of course.