I did sleep until a really late 7 o’clock. Still didn’t mean I got enough sleep and that overshadowed the whole rest of the day.

There was breakfast and everybody else got up late as well. My husband called his mother in the hospital and we ended up deciding not to visit her after all and she will reschedule her birthday dinner which was supposed to happen on Friday evening.

She still has no idea when she’ll be back home, they want to keep her under observation just a bit longer. And with the holiday today nothing much was happening anyway.

Today’s lunch was supposed to be spaghetti bolognese but then we found that we were out of spaghetti. And penne. Had capellini instead: 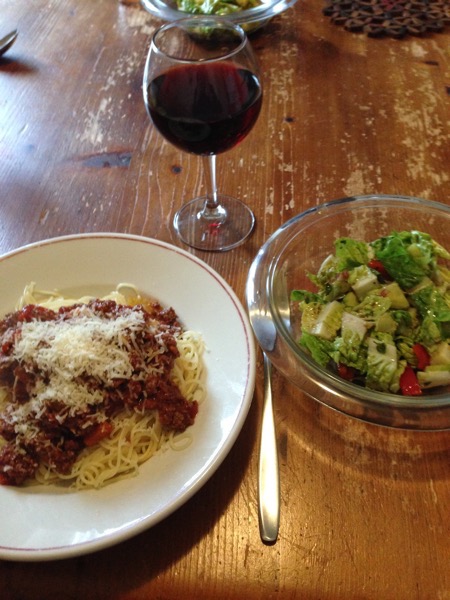 Yes, that’s red wine for lunch again. We had some leftover wine that we didn’t want to go to waste. And in the evening we had the rest of the champagne. I guess we’ll return to normal today.

I spent the afternoon reading and thinking and setting up my bullet journal for January. Also agonizing about doing the Kanban board or not. I know. It’s silly. I should just try it but putting my tasks and goals up on a wall in my house feels a bit scary. And I’m afraid that if I have it there on the wall for everybody to see I won’t do any of it.

Other than that I didn’t do anything at all.

In the evening the boy and I watched the third Star Trek movie (the old one) and agreed that we like this one better than the second one. I’m perfectly aware that a lot of people think that the second one is the best of all but I tend not to agree.

Then I participated in Orna Ross’ webinar but found that I was a little too tired to listen properly. I did take in as much as I could but I might have to watch it again some other time.

After that I wrote into my journal and made the list for today, got ready for bed and called it a day.

Today there will be running again and we’ll cancel my mother-in-law’s dinner reservation and take care of garbage pickup and I will teach one student and attend another webinar, this time by the fabulous Jessica Abel called: „Against Grit, 6 Steps to Design a Creative Habit That Sticks“. I bet it will be excellent.

And I will find out how we can watch the New Year’s episode of ‚Doctor Who‘.

I realize that a lot of my life revolves around watching TV shows right now but I also expect to get back to writing today and touch my sewing and the piano at least briefly.