Another one of those in-between days. Which is normal for what we Germans call the ‚time between the years‘.

I woke up stupid early again after having read until 11.30. I might have been a little tired throughout the day. I wrote my morning pages and worked on the novel for ten minutes before getting up slightly late. Breakfast, five minutes of meditation and another eight minutes of writing before my husband showed up.

I wasn’t the only one who was a little late and so I didn’t manage to finish the cleaning before it was time to start making lunch. I still need to vacuum the old part of the house and I need to clean washbasins and toilets. I did get the potatoes ready in time, though. Pity that I didn’t give them enough salt but everything did taste fine eventually: 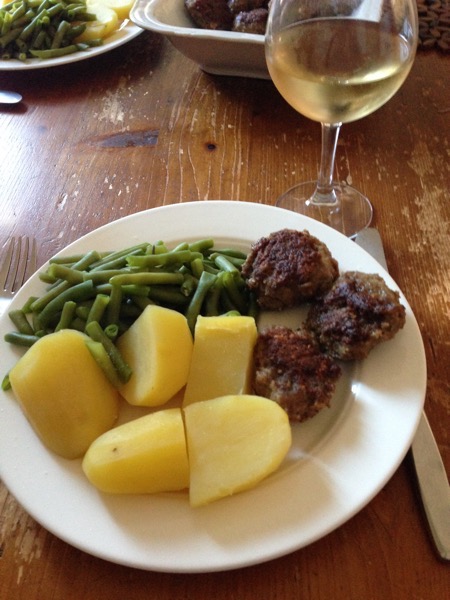 So there was more waiting.

After lunch when I was sitting around trying to make myself do the dishes the doorbell rang. It was a neighbor. It’s the 90-yo. neighbor who is a friend of my mother-in-law. She wanted to know how she was doing and if we knew anything. Well, I couldn’t tell her much.

Five minutes later the doorbell rang again. This time it was our direct neighbor with an old, broken guitar. If we could use it? He’d throw it in the trash anyway. Huh. We now have a broken guitar sitting in the annex hallway waiting to be looked at.

Then I finally did the lunch dishes and my husband and the boy were outside. They wanted to finally take care of the vines on out garage. There are wine berries still hanging there that fall to the ground all the time and my husband wanted to cut those back and clean the whole mess up.

And just when they started a car pulled in front of our garage with my mother-in-law and her sister in it. She was coming home after all.

We talked a bit, she told us what she needed, lots of errands for the boy, and we’re happy she’s back home. Her first load of laundry is already washed and hung up (by the boy) and some salmon is defrosting in her fridge for today’s lunch.

While my husband and the boy were working against the setting sun outside the annex bell rang. Two of my husband’s students were standing outside. They had confirmed their lesson by email but my husband hadn’t gotten it in time. Luckily I was in the annex at that point so I could fetch my husband and he could teach them.

Then the boy and I had dinner and watched Star Trek. Both episodes were a little meh. But I finished plying the advent calendar yarn!  Now I only need to make sure I remember which of the three skeins belongs at what point of the yarn, and then I will be able to knit something with it.

Today there will be running and grocery shopping and all the things for once. I hope.