I have reached that part of Christmas break again, the one where it feels like I’m mostly for it to be over. I’m hoping to get out of it again real soon because I still want to have some fun over the next ten days.

I woke up early but was already a little out of it because I had no idea what the day would bring. I really don’t like that. I know, it’s not a big deal and I really strive to become all calm and stoic but I’m still not there yet.

Had breakfast, did not write morning pages and did not write fiction or meditated. It’s all the fault of the new book I started the day before, „The Kiss Quotient“. It’s fabulous, worth it for the first sentence along and it was only 1.99 € on top of that. First sentence:

„I know you hate surprises, Stella. In the interested of communicating our expectations and providing you a reasonable timeline, you should know we’re ready for grandchildren.”

Stella Lane’s gaze jumped from her breakfast up to her mother’s gracefully aging face. A subtle application of makeup drew attention to battle-ready, coffee-colored eyes. That boded ill for Stella. When her mother got something into her mind, she was like a honey-badger with a vendetta – pugnacious and tenacious, but without the snarling and fur.

Over my husband’s breakfast we decided to not go out today, there is just so much stuff we wanted to do at home and also we still had no idea if my mother-in-law would be coming back home or not. We actually didn’t hear from her all day, we’ll call her later today, I guess. I also decided to do the podcast next week for a little breathing room.

The boy got up at a reasonable time and offered to accompany for the grocery shopping. We went to the health food store and to the smaller grocery store, ended up without quite a few things we’ll still need to get later but instead with a varied assortment of sweets and potato chips. As one does.

Meanwhile my husband made chili for lunch: 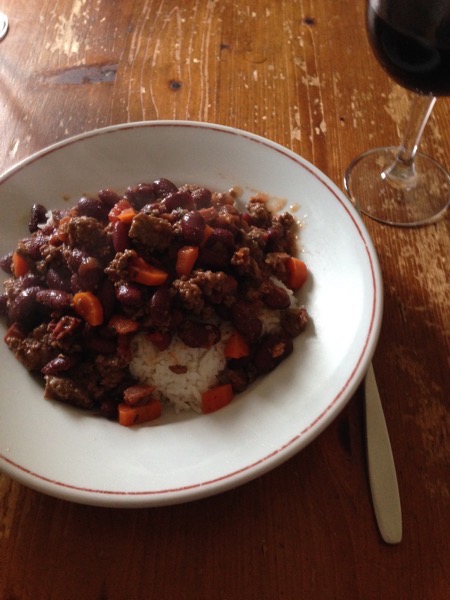 Just before we were eating (and throughout, much to our chagrin) one of the boy’s friends asked him if he wanted to go bouldering with him and his father. So the boy got ready, we printed the permission form and filled it out and then he was whisked away to Munich.

So I was sitting and waiting for news of my mother-in-law and I realized that I had no idea when the boy would be back.

I finally managed to tape the yoga pants pattern together and cut it out and I also managed to find my self-drafted leggings pattern, put one on top of the other and started thinking about how to meld them into something that might fit me.

Then I did another module of the book cover design course and had trouble with GIMP yet again. Slightly steep-is learning curve but I’ll get there. I might even finish the course until next week as I hoped.

Then we watched some Star Trek and I plied the never-ending advent calendar. I started watching yet another webinar, this one about sketch notes but it was not for me and I really wanted to do some writing instead. I also want to learn how to draw but I guess I’m just making excuses. It’s the same with everything: draw more and get better. Then I got ready for bed read and read and read and that was that.

Today there will be all the cleaning. And strength training. And the cutting out of the fabric for the yoga pants. And all the things.

No slump at all. Of course.