And no, I did not get everything done on my list. Still tired, so I guess that’s okay.

I woke up super-early and wrote my morning pages, then lounged in bed, made breakfast, helped the boy get ready for school, meditated for 7 1/2 minutes (got too impatient for the ten I had set my timer for), read and learned some more about using GIMP to make book covers. Only afterwards did it occur to me that I had completely forgotten to actual do the projects suggested in the course for the past four segments or so. Guess what I’ll be doing over the weekend?

My husband got up and we talked and I knitted some more gauge swatches for a possible Owligan: 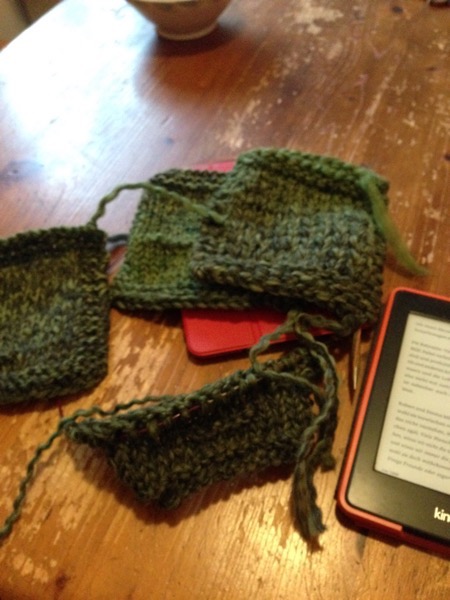 Following the pattern I should hold the yarn double but that gives me either a fabric that’s way too stiff for my liking or something that’s nowhere near gauge. If I use the yarn without doubling it I am much closer to stitch gauge but really far away from row gauge (as per usual). Now that can be compensated for but doing so for the yoke might be a little complicated. Though, on the other hand, I often find myself needing more rows than specified in the pattern and since my upper body is quite short that usually works out fine.

Interestingly I had the exact same row gauge with three sizes of needles. I washed the swatches and will see how gauge changes after that. I need to wait for them to dry first.

Then I did the customary cursory Friday cleaning. I even tried vacuuming cobwebs from the bedroom ceiling (I keep only seeing them when I’m not cleaning and while I’m cleaning they are much harder to detect, might have to do with the light in there in the mornings.) but they were sticking to the walls like crazy. So. The house is cleaner than before, not deep cleaned in any way.

Then the boy came home from school early and we went to the Greek restaurant that my husband frequents every other week: 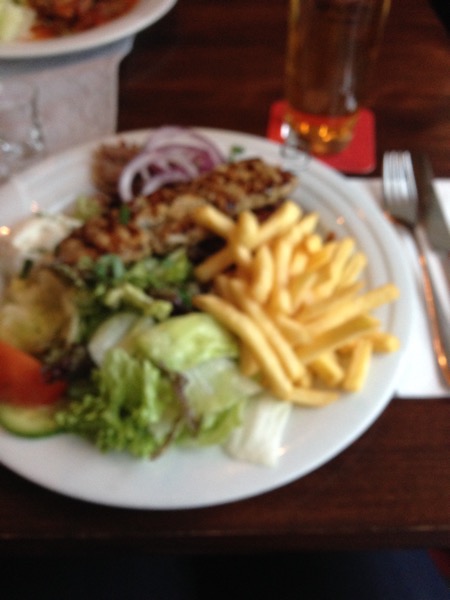 The food might have been blurry but it was good (that one was mine). 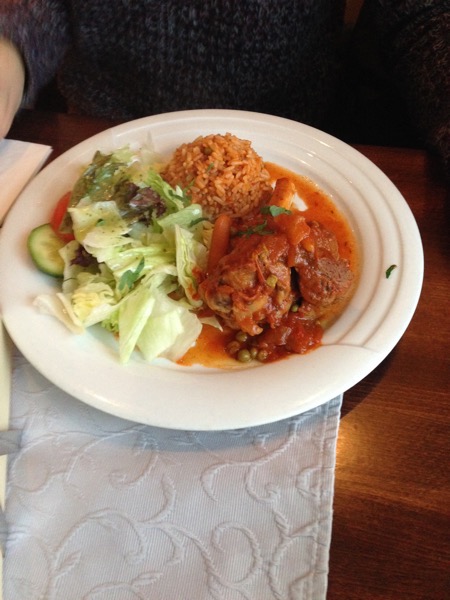 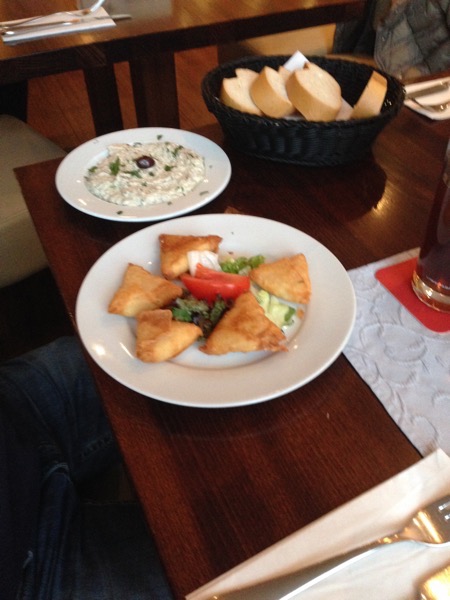 The waiter kept asking the boy if he wanted a beer instead of his soda but he politely declined. (He could have had one since we were with him but he doesn’t like beer. Or wine.) On Monday he will be old enough to walk into a bar and buy beer or wine on his own. Which means – and that’s a big plus – come Monday I can send him to get beer for us. Ha!

Then I taught a few students and then the sleep deprivation hit me. I had wanted to wrap Christmas presents but didn’t. The boy and I did some strength training, though, so that was good.

Then we watched some Star Trek and I had a hard time finding the way to bed because I was so low on energy. Also, my husband remarked that I was sounding like I had a stuffed nose again. Oops. There might also have been some sneezing in the morning. I just hope I won’t get sick again.

Today there will be running and lasagna and the boy is invited to a poker night thing at a friend’s house where they will refrain from sleep and eat too many sweets and I will have to watch Netflix without him for a change. I might start plying the advent calendar because I won’t be able to get it all on the bobbins I’m using right now.