So I woke up from the alarm because I went to bed way too late.

Decided that morning pages were more important than fiction writing in that particular moment because of family drama and Christmas panic. Breakfast and such and then I decided that there was not enough time to write but instead I worked a little on the book cover design course.

My husband had breakfast and we talked a lot about all the fighting and drama. It’s always rather interesting how different things look from the other side. We cleared quite a few things up and family drama dissipated.

Then I went to get that package from yesterday, decided to go to the nearer grocery store that’s not as big and, of course, didn’t get everything I needed.

Came home to lunch in progress and managed to help a little. Very yummy lunch, no fighting: 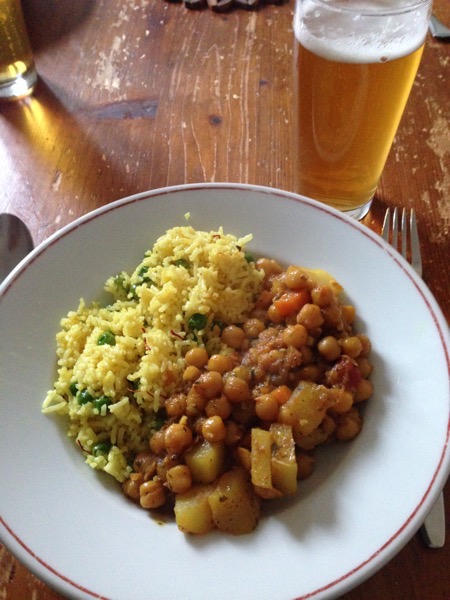 I voted against an extra chicken curry because of more work.

Then the boy and I went off to the dermatologist while my dear husband did the dishes. The doctor told us, „I already told you everything the last time.“ The boy is supposed to just use his cortisone cream indefinitely, as long as twice a week is enough. It would be best to use it on two days following each other like Saturday and Sunday and then taking five days off. Apparently that won’t make his skin all weird and callus-y.

We were out of there in just fifteen minutes or so which made all of my worrying about being able to teach my first student of the day completely unnecessary. My husband had agreed to open the door and teach him if necessary, nonetheless.

Since we still had time left the boy and I went to get some of the stuff I couldn’t find at the first grocery store of the day. I have to say, the really big one is still the best one for me because the choice of things like organic capers or olives was severely restricted in the other shops. And finding the right yoghurt can pose an interesting challenge as well.

We went t the pharmacy for a new cream prescription for the boy, this time with added fat. Before I also bought some extra milk so that he can finally do some milk and olive oil-baths for his hands. My mother got that tip from her dermatologist’s assistant and it sounds totally reasonable to me. The boy is a little reluctant to plunk his hands into food but I’m thinking that milk and olive oil will work rather well.

When he was a baby (and already had skin problems) we used to bathe him in lukewarm water with a glug of olive oil. He did smell a little like salad but his skin was much better. For him we could basically throw most of the regular baby care products out because they made him break out in a rash. Poor thing.

I’m afraid he’s coming after me in that regard. (Okay, he’s like me in many areas, shush.)

I came home in time to have a little break before work, even, and then I taught a student or two, and then the boy and I started spinning my advent calendar fiber because I was so tired all day that I knew I didn’t want to spin all of it late at night. Taught some more, and then spun the rest while watching a video on „How to make 2019 your best writing year yet“ and the replay on a book cover design webinar.

The webinar was okay-ish, I did learn some stuff but it turns out that I’m having opinions already about this topic and the webinar host and I wear not on the same page at all. (I also might have looked up one or two of the books he showed in the webinar and might have found one that was gorgeous but not doing a proper job of selling that book. Funny, how that book’s ranking in the online store was not very high. And even though the first in the series had come out in 2015 there was no second in the series yet. As I said, gorgeous and unusual but not making you want to read the book.)

Of course, all of this doesn’t mean I’m ready to design a good cover yet, I mean, I just spent fifteen minutes this morning not understanding why I couldn’t move my text layer around…

That’s one of my main things at the moment, time and again I’m learning that knowing and doing are two separate things. And that webinar host is so much better than me in the actual design, it isn’t even funny.

While I was still teaching and when I was spinning my husband and the boy had a deep and involved discussion in the kitchen. I’m really happy that they are spending that much time together. I think it was about spirituality and philosophy and the scientific method in general or something similar. I didn’t stay because I didn’t want to disturb a rare moment of father and son bonding (even if they were disagreeing heavily). It is rather sweet to see how much the boy sets his faith on science. Not that I think that is wrong, Just, there is so much we can’t touch with science yet…

I downloaded the second book in the „Vampire Knitting Club“-series, just in case I needed to start that one while the wifi was down during the night. You know how it goes.

I did not write any fiction because I was just too exhausted and tired but I did manage to get ready for bed and turn the lights out on time at least.

Today there will be the weekly sloppy cleaning of the house, and the changing of the sheets, and the going to the Greek restaurant for lunch because the boy gets out of school early. Then I will teach only very few students because two did cancel already, and then I will hopefully manage to wrap all the Christmas presents and get the packages ready to be dropped in the mail.

Oh, and this morning (I totally forgot) my mother-in-law came downstairs very determined that she wanted a pacemaker right now and was off to her doctor. Her blood pressure – which is generally too high – is going up and down like crazy and she also had a rather incredibly low pulse the last two days.

It seems her doctor talked down again. I think she underestimates the stress she is under right now because of Christmas preparations. I can totally understand that she is confused and scared, though. The doctor explained to her what is happening, but unfortunately she didn’t listen properly because she was convinced that she wouldn’t understand it anyways. Which is a little unfair. I really would have liked to hear that explanation so I’m less baffled and confused (and so would my husband and the boy). Alas, all we know is that he gave her extra meds and thinks that things are somewhat under control.

And then the weekend ahead. The only things planned are baking cookies and maybe – just maybe – recording the special English episode of the podcast.

Sorry for this being so long (1236 words). There seems to be quite a few things on my mind.