I woke up early and dawdled but managed to meditate before my husband got up, at least.

Then we started talking about how we want to renovate the kitchen and my husband was saying that the one cupboard where we keep our tea mugs and such was the big problem and I realized that we don’t even need that cupboard. We could rearrange another one and put all the tea-making stuff in there.

And true to form my husband fetched a ladder and start emptying the cupboards.

The one that’s the problem is empty now, and the one that was full before is almost full again but with different things. And we did find a place for almost everything.

Since my husband put everything in its new place I’m expecting a bit of re-shuffling soon. I can already see where things that we need often won’t be as accessible as we need. But then I shouldn’t really complain because I was only sitting there saying, „We should put that thing in the basement,“ and such.

And I knitted. And made a phone call. And knitted some more.

Lunch was pasta with tomato sauce, Brussels sprouts and meatballs, a little weird but tasty: 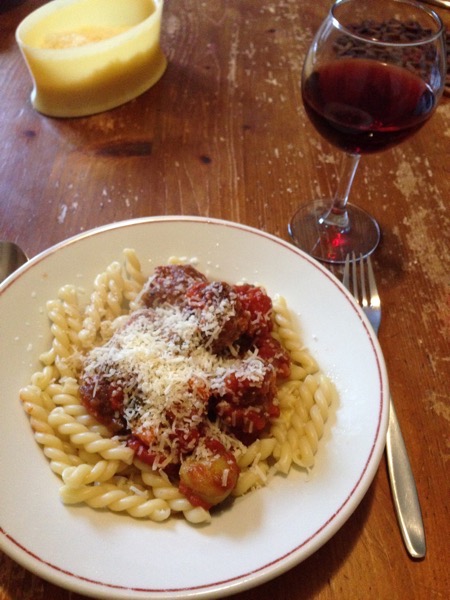 And then I basically spent the rest of the day either surfing the web or knitting.

The NaKniSweMo cardigan is almost done. I’m not happy with how the neckband has turned out so I’ll re-knit that today.

The boy and I watched some ‚Star Trek‘ and that was the day.

The cold is much better now. Maybe I’ll be healthy again soon.

Today there will be running and teaching and I don’t quite know what else. Apart from the knitting of the neckband.

Yes, I haven’t written anything yet again. That’s not something I’m proud of. I’d like to get back into writing real soon. We’ll see how that goes.