I didn’t sleep well and woke up stupid early like 5 or so. Tried writing and failed. Felt really awful because of no writing.

Got up to a kitchen piled high with dirty dishes because I hadn’t washed any the day before. Since I had promised my husband to do them before going to sleep – and yes, I broke that promise – I washed them right after my breakfast, when the boy was getting ready for school. I immediately felt better because instead of whining about not writing I had done something tangible.

My husband showed up a little late while I was busy preparing the podcast. He wasn’t feeling well, now he is getting that cold I had before. We talked quite a bit. I did more dishes and packed a birthday present. Then I went to the post office to mail it and ran some errands. I’m rather proud that I managed to not buy chocolate bars for myself both at the big grocery store and at the health food store two days in a row.

I’m trying to get back to eating less sugar and no snacks. I’m still eating dark chocolate after lunch every day but would like to skip dinner again most days and not eat all the cheese late at night. Just so I don’t end up fat again.

My husband was late for making lunch because he had a friend over and they had a rather emotional conversation. Friends are more important than lunch on time, and also the boy didn’t have to return to school and none of us started teaching before four so that was okay. Lunch was very good: 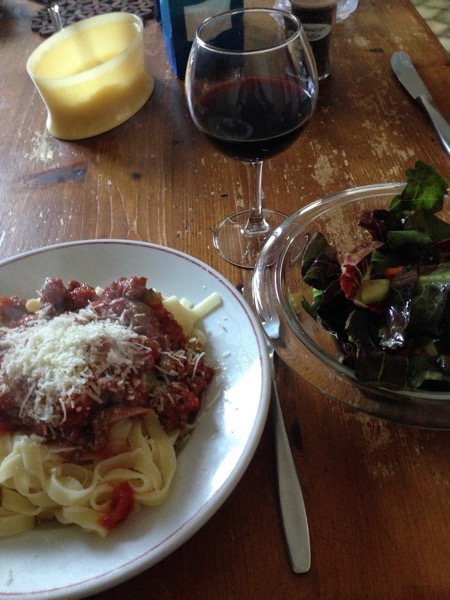 Then I took a long-is break and then I recorded the podcast. Right in the middle I couldn’t hear myself anymore all of a sudden. Turned out that  the amp my husband had tried to repair blew the main fuse for the annex. Oops.

A few minutes later I could return to recording. Another slightly incident in a slightly weird day.

All morning I had been thinking about NaNoWriMo. I could still win if I managed to write 4,000 words per day every day until the end of the month. But that would be somewhat brutal. And I had failed to make me write two days in a row again. And it was starting to affect my sleep. And I felt that I didn’t have the time, energy and headspace for other things in my life like the new book cover design course and the revamp of the music teaching website.

Sitting around paralyzed because I feel under pressure doesn’t help anyone. It’s interesting, though, that my reaction to pressure and stress is usually to be paralyzed. I just opt out.

So I decided to give up on NaNo this time. That is a pretty big decision for me, so far I have won every time that I did it. But. First of all what I really need is a process that allows me to write a steady stream of books that are as good as I can make them. I thought NaNo would help but with me being sick and then not getting back into the groove it didn’t. I was hoping for that ‘mad dash to the end‘-energy that I love but as I said – I couldn’t make myself do it.

So I’m stepping back. I’m telling myself that it’s okay to not write for a few days. And to not finish the book until the end of the month. That I’m allowed to read and to watch Star Trek and to do a design class instead.

And I felt better in an instant. It’s not often that I’m actually stressed but this time NaNo was stressing me out. I think even more so than last year which was rather insane as well. I don’t need insane in my life, especially not of my own making. I’ll just get back to writing soon and go at a sustainable pace, whatever that will be.

I taught all my students including the boy, I skipped dinner, I watched a bit more of my new course and I went to bed early. Luxury!

Today there will be cleaning and frozen pizza and quite a bit of work on getting the podcast ready for publishing. Since I recorded in two parts I will have to splice them together which is a bit tricky for the video.

I will teach lots of students and then I will watch some Star Trek with the boy. And look forward to a very low-key weekend. Maybe with some pressure-free writing.