Woke up a few minutes before the alarm. I’m taking that as a sign that I slept enough. Also, my Fitbit tells me I slept an hour longer than usual. I fell asleep last night, sitting in bed before I had brushed my teeth. I got up again an hour later to get ready for bed. I don’t recommend this.

No writing in the morning. I really didn’t want to right away, and my husband had announced that he’d get up earlier than usual. And then he didn’t because now he has the cold that felled me last week. Poor thing.

The boy didn’t have to go to school but didn’t sleep in too bad. And when I asked him he agreed to help me with the mastic grocery run.

It was really cold outside so I was rather happy about the hat I made that fits under my bike helmet.

We went and bought all the groceries. Still forgot some things but the list was long. And it was nice to have the boy with me. I’m really not used to do this with anybody else, though.

Then I helped to make lunch, Indian this time, rice and dal and chicken with spinach. Yummy: 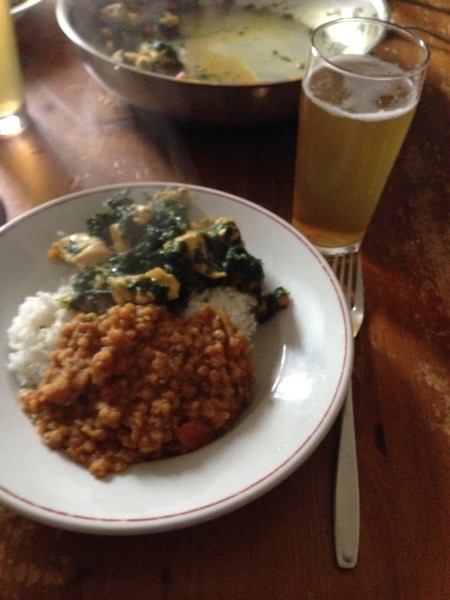 Sorry for the blurry photo.

Then I dealt with a lot of laundry and took a shower and it was time to teach. First student didn’t show, probably due to the holiday, second was on time, third a little late.

I had planned to write between students but as usual I couldn’t. Switching between teaching and creative writing is hard and I can only do it sometimes.

Then I ate dinner with the boy, he took a shower which meant no washing of dishes and then it was almost time for the monthly webinar with Orna Ross.

After that I still had to deal with the dishes.

Today there will be the recording of the podcast, quite a bit of teaching and as much writing as I can cram in. But the that was what I had planned to do yesterday as well. Meh.