I even woke up before the alarm.

Decided that I felt well enough to see the doctor to have my thyroid looked at. No writing. I’m trying to eat less sugar so I left the rice sirup off my muesli and it tasted good, even.

I wasn’t sure if I should take an earlier train to the doctor or one that would get me there just on time. Well, the earlier one would have been better because the one I then wanted to take didn’t go at all. I ended up being twenty minutes late. I did call the doctor’s office, though, to give them a warning, and it turned out to not be a problem because when the doctor called me she was apologizing that I had had to wait for so long. Um, no, I just got there as well.

No blood work this time, just an ultrasound of my thyroid. The nodes seem to be about the same size as before which is a good thing. I wasn’t sure if I should talk to her about how I’m feeling because I just realized that I’m basically feeling the same as I did last year when I went to the doctor. I’m a little better with the thyroid meds but I’m not well. My energy levels aren’t quite right, and I’m still a little foggy and I’m cold, cold, cold all the time.

I told her. She looked at the computer. Said, „Your test results are all fine, your TSH is fine, have you considered therapy?“ Um, yes, but that’s not the issue here. When I came home and told my husband he thought I was joking because before leaving I had talked to him about this. I wasn’t sure if I should tell her that I’m still not feeling well, and I told him that she would look at my test results, say that they’re fine and tell me it’s all in my head.

We agreed that I should come back in nine months for the next ultrasound and that I should see an endocrinologist in between. Oh, and I’m not looking depressed. (I never have. The years that I spent seriously depressed knitting on the kitchen bench? I was still going out, seeing people, doing my job and smiling. I’m really good at pretending to be normal.)

I’m also thinking about changing up what I eat. Maybe that will help. Well see.

After the doctor I went to the nice health food store and bought all the meat and all the spices and only very little chocolate for the boy.

Then I went back home, first waiting for the train that was supposed to be fifteen minutes late but ended up being right on time. Maybe that was the train before, no clue.

I did the dishes from breakfast and dinner the day before, helped making lunch: 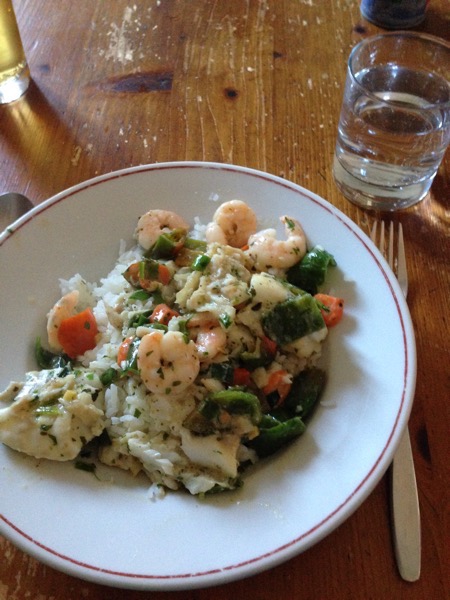 Improvised Thai-like thing. Our Thai curries were both off, we didn’t quite have enough coconut milk and my husband would have preferred chicken which we didn’t have.

Then I lounged about, re-knitting everything I did in the morning because of mistakes, then I taught my three students and watched ‚Doctor Who‘ with the boy.

We had a long, long conversation about school and about how to learn stuff for school because he came home for lunch telling us that he completely failed an economy test and a German test. He also got a C- on his last Latin test which made us all very happy.

So he explained what the problem is with learning for school in his opinion, and how he never gets what his German teacher wants. And I explained to him that we would be happy to help him, and that he doesn’t have to get things on his own and that I’m a professional teacher who studied how to learn and teach stuff for decades. He might not be able to see what’s important to learn for his German test but I bet I can. My husband and I used to game that system for years.

We made an appointment for looking at the stuff on Saturday. Since I’ve put it in my calendar I’m hoping that it will actually happen.

I’ve decided that while I don’t want to become a helicopter parent maybe a little hovering will be okay. My husband coined the term hovercraft parent.

We also draw up a plan to put Latin grammar into the boy’s brain as fast as possible.

Somehow I never got around to writing. I did feel better but I didn’t feel all well again.

Which brings me up to 2,600 words per day until the end of the month. Great.

Today there will still be no exercise but a rather full teaching day. Maybe I’ll go to the health food store in town. There really should be writing as well.

The sweater is coming along rather nicely, I’ll close the shoulder seams later today and start the first sleeve.