Not my last minute panic, mind you.

I woke up before the alarm again despite having written late the night before. I did write a few words before breakfast but not all that many.

Had a slightly late breakfast, finished reading a book, knitted a little on my sweater.

The boy was rather late for breakfast and there was quite a bit to talk about because of his impending trip.

I made Spätzle from scratch and Kässpätzle for lunch. It was delicious: 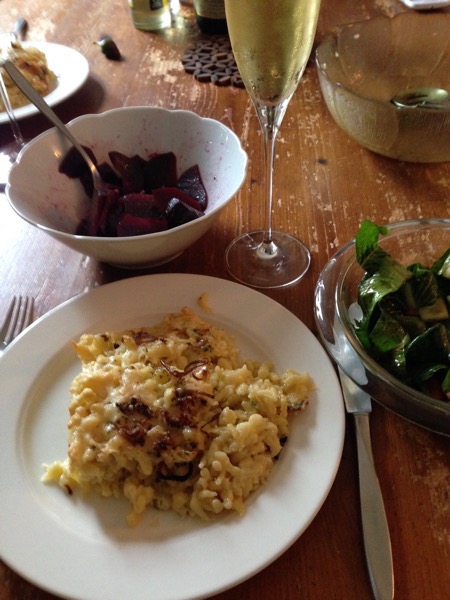 We even opened a bottle of champagne to celebrate the last day of fall break.

Then I read some more and waited for the guy who had borrowed my husband’s drum set hardware for the concert we had planned to attend the night before. I wound some yarn, from bobbin to skein and some skeins that I had washed into balls for knitting, then I cleaned all the Majacraft bobbins and cut a piece of brake band off. I tested plying with the bobbin that I had thought was broken and I think grease on the brake band must have been the problem. It seems to be working again.

Then I was just about to start doing yoga when the boy asked me to take a look at his presentation. He will be traveling to Bremen for the science thing he is doing at school and he might have to give a presentation on last year’s project.

By then it was almost dinnertime and he hadn’t packed as much as his toothbrush. Also, the presentation wasn’t done yet. Fun times! And right in the middle my husband wanted my opinion on an essay he had been writing.

But we got everything sorted and the boy and I watched an episode of „Deep Space Nine“ and he got ready for his trip. I have no idea how much time he spent working on his presentation after that but at least he was fully packed.

So, today he will leave for the week right after breakfast and I will go for a run and teach a few students and try to make up for the lack of writing yesterday.