I woke up early again but only at 5.30 which is completely okay. I have apparently reached the part of fall break where I just wait for it to be over which is rather annoying. I have plans. I’d like to not spend my day sit around and eat chocolate and cheese (not together).

I lounged in bed until after seven, had breakfast and started reading about design again. I also looked at the tracking for that package and decided to contact customer service. I called them on the phone and was rewarded with a cheery, „Good news! We have your package and it will be delivered to you within one to two business days.“ Yeah, right.

So I wrote an email venting a bit, got a reply pretty soon where I was told that the mail person hadn’t been able to find my address. Now, there was a typo in the street name from the bit I could see but then how had he been able to try delivery twice without reaching anybody? It remains a mystery.

In the end I wrote back and took them up on their offer of switching delivery to one of their „package shops“ only to get an answer telling me that they were really, really sorry but that the package was not in delivery anymore and that I should contact the original sender.

I have to say that I am really, really angry.

Now I’m just hoping that the package will get back to the wonderful hand-dyer I bought it from and that she will be able to send it to me again. Maybe using a different mail service this time.

I was also worrying about my favorite spinning wheel, my Little Gem. It isn’t working properly. I had thought that it was only a faulty bobbin but I tried using it the day before and it wasn’t working with a completely different bobbin and flyer.

So I had to do some research on what might cause this. If I’m lucky this is just about grease getting onto the brake band so that there isn’t enough friction on the bobbin while spinning. Everything else would be a little more complicated.

Somehow I didn’t have the nerve of tinkering with it. The day before I had switched to my second spinning wheel, the Victoria, and now it might be a little pink on the flyer. My niddy noddy as well.

But. I will be finished with that endless yarn that I started in 2017 soon.

I was also waiting for my possible student of the day to tell me if she would be coming or not.

I really need to learn to detach myself better from uncertainty. Still working on my stoicism…

We had a rather easy lunch – without the boy this time because he was out for Mongolian food with his grandmother: 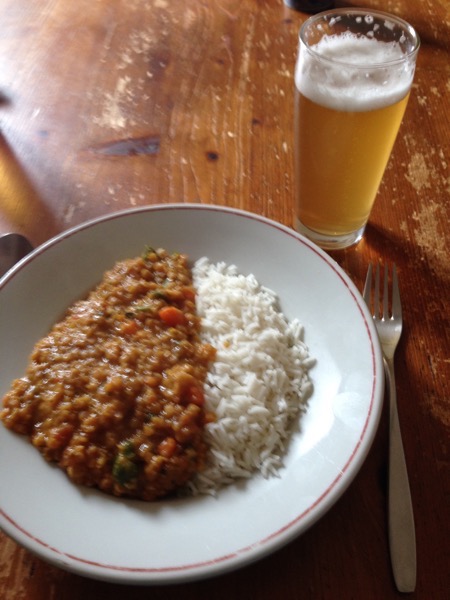 Then I started winding plying balls: 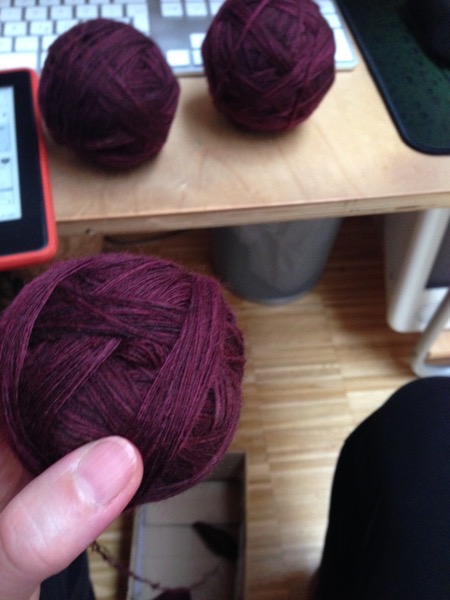 While watching first a rather boring „creative summit“ online and then a few slightly less boring documentaries on Netflix. I guess I just wasn’t in a film-watching mood.

Then I plied two of those balls. Still two to go, plus some fiber to spin and a lot of ends. I’m not quite sure what to do with those. I’m hoping that I won’t need every bit of string for the sweater I’m going to make.

Instead of my whole strength training routine I only did a few pushups and such. Then I taught the ukulele student, watched some Star Trek with the boy, wrote a few words and went to bed.

Plying yarn is surprisingly exhausting but then I don’t usually wind yarn and spin for hours.