Woke up at 4.33! A little too early but I wasn’t able to fall asleep again. Yep, time change. But I might have gotten enough sleep and in a few days I will have adjusted.

I did start writing around 5.30, so that was good but only got 300 words in. I did write morning pages again. Didn’t want to but did it anyway. I think they are doing me good at the moment.

I got up at seven, had breakfast and dawdled long enough that I thought there wasn’t time before my husband got up. Of course, that meant he showed up half an hour later than usual.

We talked about Buddhism. And Fender bass guitars. I worked on the crochet blanket. And then I made two appointments, one for my thyroid ultrasound and one at the optician again. I need to get the current contacts checked and then I need new reading glasses and then I will be all set for glasses and such.

The morning was rather slow and so we went running a bit late. I spontaneously decided to cut my run short and turn around after 2.5 k instead of 3.7. It was really nice, damp but not raining and no one out there: 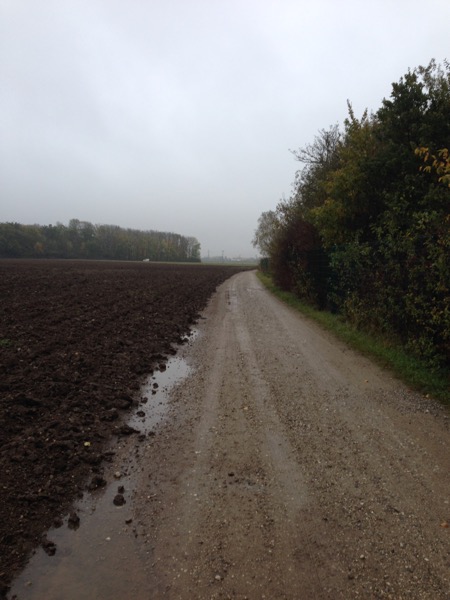 When I came back I decided that I’d rather go grocery shopping right away instead of the day after. I got some cheese from the supermarket that is near the health food store, bought a couple of things at the health food store – including chocolate, of course – and walked back home. There, I only needed to help make salad because we were eating leftover lasagna: 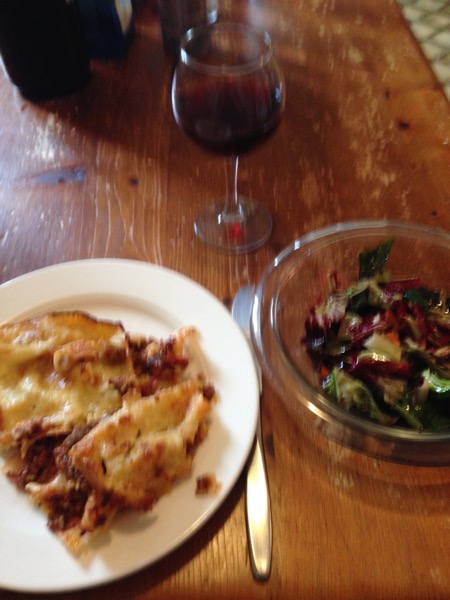 Then I procrastinated a bit and then I started plying the burgundy merino while watching Netflix. I asked the boy to join me for watching „Doctor Who“ early because I was expecting another delivery attempt of the dreaded package but when I checked the tracking online it said that the address couldn’t be found and that it had gone back to the distribution center. This is starting to make me really furious. I was home every single time that mail person tried delivery apart from Wednesday and if they had just rung the bell upstairs or at the annex I would have had the package on Tuesday already. There is no way of contacting that mail service before tomorrow and I am beyond frustrated.

I do try to remind myself that this is not a big deal, really, but I would have preferred not to go out of my way four days in a row for a mere package. I mean, I even left a message that they could just leave it on the woodpile next to the annex…

„Doctor Who“ was brilliant as ever, I have to say I do love this new iteration of the doctor.

Then I needed to do some more writing but was a little tired. Tough.

Today there will be yoga (my hip says it’s mandatory), and one student (ukulele!) and not much else. Plying, probably and some washing of the yarn. I’m still pushing through that merino-project because I am suddenly determined to knit a sweater out of it in November.