Despite the time change I slept until 5.30 which is pretty long for me. Because that would have been 6.30 the day before.

I wrote morning pages again, went online (no writing), started breakfast, realized that I had forgotten to take my thyroid medication, had to wait for half an hour before actually having breakfast, tried writing and stopped after five minutes. Okay, six. Which gave me 220 words.

I had expected my husband to show up really early but he was only regularly early. Seemed I was the only person in the family who had remembered the time change. I was also the one who changed the two clocks that don’t change themselves, of course.

The boy showed up early for breakfast, we talked, and I was so engrossed with the crochet blanket that time just went away from me. In the course of the morning I tried three different sizes of crochet hook for the slipstitch edging and ended up using one that is 1.5 mm bigger than the one I used for the main blanket. Strange.

Then I called my mother because of her birthday and helped with making lasagna. Lasagna is always a big undertaking: 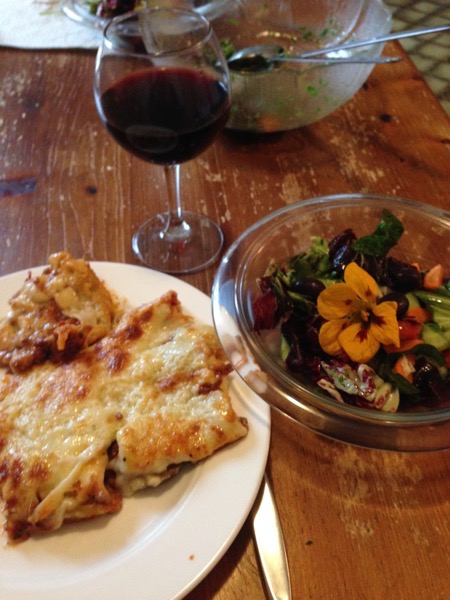 Then I read a little and went online a little and my husband showed up every thirty minutes or so to tell me about the bass he is working on. It is all very exciting, it’s a Fender jazz bass from 1972 that needs maintenance and a bit of repair.

After a while I let myself slide down into the slump and decided to skip both yoga and strength training. I usually do yoga on Sunday mornings but because of the phone call and the lasagna there hadn’t been enough time. Doing yoga right after lunch is a really bad idea and then, somehow, I never got around to it.

In order to avoid feeling completely useless I moved myself over in front of TV and watched „Extraordinary Homes“ while spinning. I’m still waffling over which cardigan project to tackle in November and I might put a lot of effort in over the next three days to finish the burgundy merino so that I can knit it up.

Of course it would be a much better and not as crazy idea to knit with the yarn currently drying in the bathroom. We’ll see.

I really should wash the one skein of finished burgundy yarn so I can do a gauge swatch. And spend some time spinning up the rest of the fiber and then wind plying balls. Lots to do.

The boy and I watched an episode of „Voyager“ while I was working away on the crochet blanket. Only 1 1/2 more rounds to go on the edging but those rounds are long.

Today there will be running and maybe even yoga. I want to write quite a bit and spin a lot. There will be a live podcast at night and I need to be ready to receive that package I have been waiting for since Tuesday in the evening. Around 7.42 pm judging by  past delivery attempts.

And there are at least two phone calls on my list. I really dislike phone calls. Some music would be nice as well.

I keep feeling like the Calvin and Hobbes collection, „The days are just packed“.