I woke up shortly before the alarm. Still feeling rather meh about writing.

Made breakfast, found that it was really windy, wrote for ten minutes, crocheted a bit. I decided that it was too windy to go running in the woods and also there wasn’t really enough time before the piano tuner was due so I did strength training for the first time in ages.

I wasn’t sure what strength training to do either but then I just did a slightly easier version of what I had been doing before I stopped. It was fun. I am all sore today, of course.

Then I sat around waiting for the piano tuner, did the dishes while he was tuning, had a really nice conversation with him, waited for him to leave, helped my husband to prepare for lunch, went grocery shopping, had lunch and then I procrastinated for an hour. 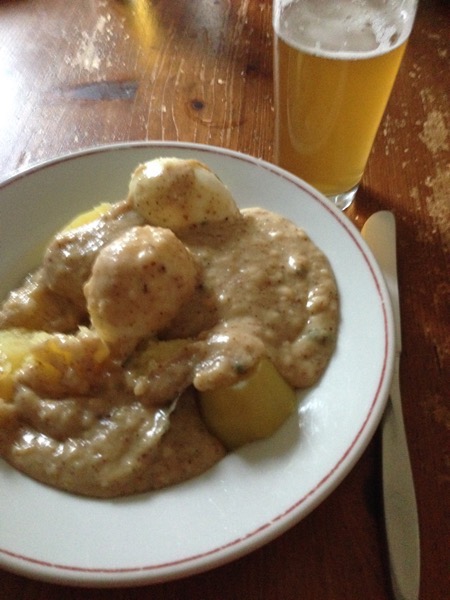 This doesn’t look pretty but was rather good, it is eggs in mustard sauce with potatoes.

Finally got myself to take a shower, taught a couple of students, did the lunch dishes and rushed off to Munich.

The  Stammtisch was really nice with a lot of people and I managed to do some networking. Went back home and went to bed too late.

Today there will be the run I didn’t do yesterday, some teaching and I have a rather long list of things I need to do. Including sending my mother’s birthday present off which I should have done yesterday or the day before.