I didn’t sleep well, woke up in a cold sweat around 3.20 and felt sick. I wasn’t sure if it was something I had eaten (too much fructose) or an infection.

I woke up from the alarm, lounged in bed for an hour and had breakfast. I didn’t feel good. And didn’t write.

My husband showed up and ate breakfast, we talked. I had sore muscles everywhere, all that running and walking the day before might have been just a little too much.

I did the dishes and then yoga. Yoga made things a little better. I ate a mid-morning snack because I didn’t feel well and then I helped making lunch. Goulash, orecchiette and salad: 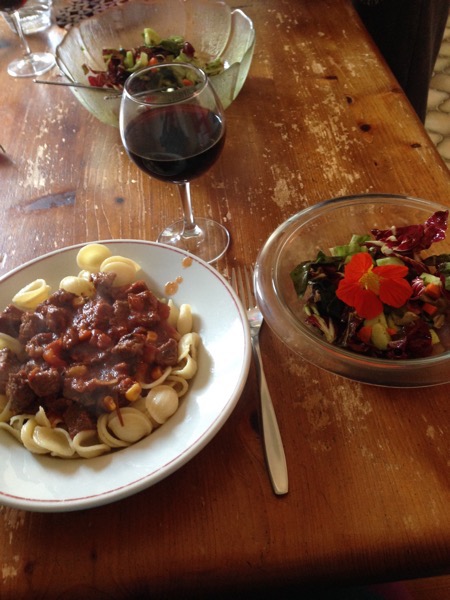 For once I decided to take a nap. I think that was a good idea. I’m usually waking up rather early these days and then I’m all out of energy in the late afternoon. So I guess I’ll experiment with a 30 minute-nap after lunch for a bit. If I have the time. I’m sitting around for half an hour after lunch anyway, maybe napping will make the rest of the day a little better.

I still just hung around most of the afternoon but I did paint my toenails purple and refilled all the empty fountain pens – as one does. I also watched yet another free online course. I do like the teacher, she is rather sweet but I lost patience about ten minutes into her first video. The class is aimed at people who have never taken an online course before, and of course she had to explain everything in detail for people who had never met her before but it was a little slow for me.

The class is about altering patterns for tops so that they fit which I am rather interested in. She also invited a couple of experts, a woman who will be talking about body-positivity if I understood her correctly, a woman who is an expert on bra-fitting and a third one whose specialty I don’t remember.

I have the distinct feeling that I am not the right person for this class. Again. The ultimate goal of hers is to get people to sign up for her FBA (that’s Full Bust Alteration) class. I would love to take a class on that topic but then I remembered that I already have successfully made those alterations in the past. I just followed the instructions in one of my sewing books. Successfully. So I might be better off not paying the money for that class.

There is, of course, a closed facebook group for that class (the free one for now) and we are encouraged to get ourselves a learning buddy. Now. I know that the whole accountability partner thing is scientifically proven to help people. But. Actually I don’t think it has ever worked for me,

I was just talking to my husband the other day about workout buddies. Both of us have tried exercising with friends and have had arrangements where we agreed to meet the other person at certain times of the week to exercise together. Everybody will tell you how great that is, that you’re just so much more motivated when you know there is someone waiting for you.

Interestingly enough the friend that I went swimming with started to cancel about three weeks in. There was always some reason. And because she didn’t come I didn’t go swimming either. Until I decided that I wanted to get fit and that I liked swimming and that I would go Tuesdays, Thursdays and Saturdays come what may.

I did have another friend who sometimes joined me on Saturdays and he was more reliable but in the end it was just me and me alone who moved her ass to the pool three times a week for two years.

And my husband tells a similar story. He had a running buddy. They started running together. The buddy wasn’t terribly fit. He wanted to change the route all the time, and he was way more interested in the conversation than the actual exercise. In the end my husband decoded that he would just go running, with or without the other guy and since then he has been running regularly on Monday, Wednesdays and Saturdays. Some time last year he added a Friday workout as well.

As I said, I know that science shows that being accountable to someone helps but I have to say in the end you either develop a sustainable habit or you don’t and ultimately you have to be able to do it on your own or it won’t happen.

The boy showed up around 5.30 because he was hungry and we watched the finale of „Star Trek: Next Generation“. I like it. The story is a bit crazy and the whole thing moves rather slowly but it is a nice goodbye to the series. I guess we’ll watch „Voyager“ in addition to „Deep Space Nine“ next.

Then I started writing this post, remembered that I had forgotten to prepare my bullet journal for the upcoming week, wrote for 25 minutes, let all the dishes pile up and went to bed.

Today there will be the usual Monday things, running (ouch), music, writing and probably not much more. I am in project-planning mode, I want to crochet another cowl, didn’t find yarn that I liked for that project (and could afford) on Saturday, thought I had enough fiber to spin for it and found that I haven’t. I might card some things together. Hm. Maybe I should mix some white or black in with the neon-turquoise and the flat blue. Yep. Sounds like a plan. I’ll divide the rest of the black BFL into two parts, card this into the ugly flat merino and should have enough for the cowl I have in mind. Huh. Problem solved. (And yes, I am fully aware that I am at a point where „I want to crochet this cowl“ turns into „I will card all this fiber and then I’ll spin it, neglect all the spinning projects in progress, ply it, wash it and then I will crochet the cowl. I might put it on the Louët Victoria instead of a spindle. Sounds like a plan. Now I just need an extra week somewhere.)

Apropos extra week, I also decided that I will do NaNoWriMo after all. Rather spontaneously on Saturday while walking the the yarn store. I am a little behind where I had wanted to be with the novel in progress. I’m at 22,000 words. The novel will probably be between 90,000 and 95,000 words when finished which means there are plenty of words to be written during November. So I think I will rebel and just continue the novel-in-progress.

I also am thinking of knitting a big sweater in lace-weight yarn for NaKniSweMo. First I need to liberate the yarn from the pi shawl I made, though. I won’t be wearing a huge circular shawl anyways, so I think I will rip that whole thing back, wash the yarn and make this cute cardigan out of it.

Planning and plotting. And I have re-inked pens to do it with. And yes, I am aware that I am making use of the collective NaNoWriMo and NaKniSweMo-energy out there for my own projects but I also learned in the past that if I rely on that to get my projects done I will only write for 30 days every year. Which is not enough.