I’d say that day was full enough for two. And went great.

I started the day by waking up at five again. After turning the lights off at eleven. Not ideal.

Did not write first thing but read and was excited about the day. Found out that the train I had planned on taking wasn’t running.

Had breakfast, meditated for five minutes and actually started writing. 25 minutes gave me 900 words which is not shabby at all. I saw my husband briefly and made him cranky by sending my phone number to Laura whom I was supposed to meet later that day.

Then I went out the door on my 8k run. Since I was short on time I managed a record time (for me). My bluetooth headphone battery died right in the middle and I didn’t even care. 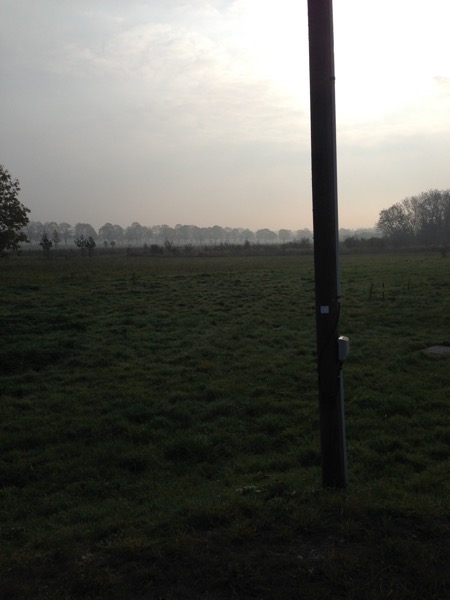 It was slightly foggy still but became sunnier later in the day. 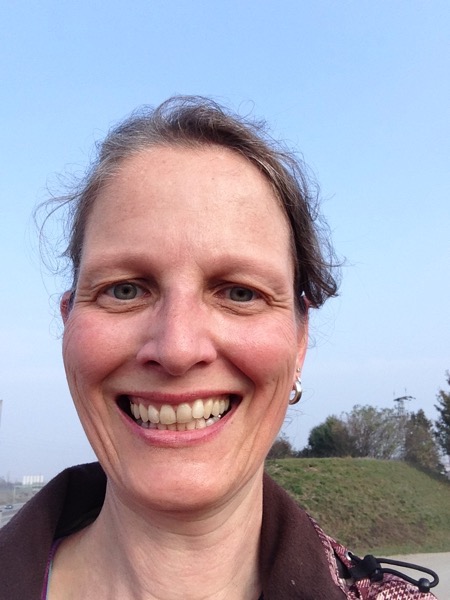 Ran back home, took a shower, applied makeup and rushed off. With the old headphones because they don’t need charging. And with a phone that wasn’t fully charged which makes me nervous. But then it doesn’t take much to make me nervous.

I decided on wearing jeans, the striped t-shirt I made and my new Cria sweater because it was colder than I thought. I also was a bit afraid that Laura – the podcast listener/podcaster I was meeting – would be put off if I showed up in handmade purple things from head to toe. I knew that I needn’t have worried about that though when she send me a message saying, „I’m wearing a yellow t-shirt and a turquoise cardigan. (Plus a dark magenta scarf and a red coat. I knew I would like her when I saw that.)

Since the trains weren’t running properly I took one for about ten minutes (after walking for twenty) and then I took a tram and walked for 1.5 kilometers after that.

We had a great time at the wonderful Mercerie yarn shop. I almost bought some yarn, even, but was overwhelmed by all the wonderful shade that yarn came in, so of course I decided, „I can spin for that project instead.”

We stayed at the shop until it closed and I had tea and some cake instead of lunch. Then I asked her about her plans and she said, she had none but wanted to see some touristy stuff.

So we set out to walk all the way through Munich. From the West through the center out to the East. Along the way we encountered a lot of other tourists. When we decided that it was indeed time for real food we went to the Augustiner Keller which is about as touristy as it gets but we managed to find the part that was a little less crowded. 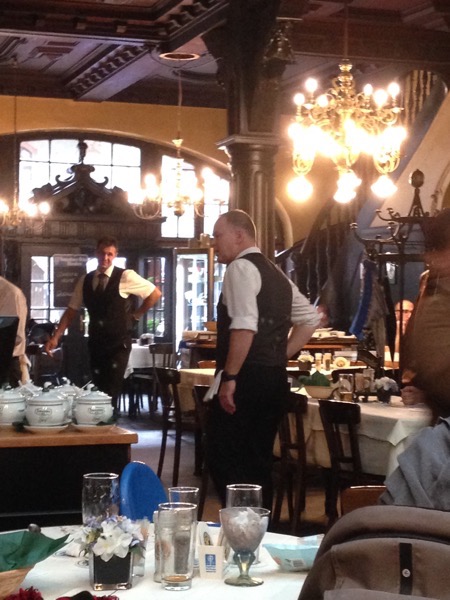 We had excellent beer and some Bavarian snacks. And we talked. And talked.

That might have been the first time ever that someone told me she likes it that she isn’t the one doing all the talking. I am rather used to people being mad at me for my incessant talking so that was a nice change.

When we had finished our meal we decided that it was time to head out again. Since the trains still weren’t running I had the crazy idea to walk to the East train station.

My train went a few minutes later. I was a little tired by then and only realized that I had arrived at my station after we pulled out again but that was not a problem. I just got off at the next one which is nearer to my home anyway. And I was thinking that they wouldn’t check tickets on a weekend where there is train chaos anyways. And I got lucky.

Went back home and my Fitbit showed me more than 28,ooo steps walked and more than four hours of exercise. Apparently I expended more than 2,800 calories.

The boy and I watched a very nice episode of „Deep Space Nine“ and tried the delicious champagne truffles I had received, I ate some cheese and had another beer.

Then I found that the podcast hadn’t finished uploading and so I re-started that for the third time.

I’ll get that out today, I promise.

Today there will be yoga and a little writing and not much else. I know myself well enough to know that there will be all slump all day.