Woke up shortly before the alarm, did some writing in the morning after breakfast. Managed to prepare the wrong breakfast for my husband again. No idea why that keeps happening at the moment.

While talking with my husband over his breakfast I had a kind of epiphany. I have been thinking about how there are people who keep pushing themselves and how I just can’t do it. At all. The day before my husband declared me the ‚person least likely to suffer from burn-out‘. I just don’t push. If I come anywhere near any kind of exhaustion I just stop.

Now, in a way that is a good thing. I certainly don’t want to turn into a workaholic and I definitely don’t want burn-out but then I’d like to have more days where I feel happily productive.

A part of this is a difference in cultures. In the US workaholism is celebrated much more than here. I remember reading a chapter in „Growing Gills“ by Jessica Able where she describes a conversation she has with a fellow American expat in France. He is completely baffled by the French. They take long lunch breaks. The go home early to spend time with their families. They take the weekends off. And most of them take the whole of August off. Every year. For Americans that seems really strange. They live in a culture where people who never take a vacation day are praised.

Which I find rather baffling because everybody knows that you can’t be productive without breaks. In the book „Rest“ the author points to Germany and says that Germans go home from work much earlier than Americans and then they have time for hobbies like singing in choirs. He also says that usually Germans are more productive while working. Duh. (One thing that really made me laugh was when he said that Germans don’t usually check Facebook while working. Um, yeah? Of course. But I digress.)

So, I am not in pursuit of a lifestyle that is all work and no play. But I would like to be able to push myself just a little further. My husband said that he didn’t understand my question in the first place which was, „How do people push themselves?“ He said that he used to be rather lazy and a big procrastinator and then he found that he was rather ambitious and that life is short and ever since he has been pretty driven.

Now, I am certainly ambitious. I also know how big plans break down into daily actions. I am motivated, I am setting goals, I am all for public accountability. Everything is fine. And then I just decide not to do it. For no particular reason. It’s like when I go running. I decide that this time I will run all the way without walking breaks, I get out the door, I warm up, I start running, things are fine and then some part of me thinks, „Um, no. I’ll just walk.“ Every single time. It is as if I had no control about it whatsoever.

And I do it with basically everything. By now I have a long tradition of not pulling through. Which makes things harder, of course.

After a lot of thought back and forth I realized that part of my is actually afraid of expending too much energy and dropping dead. Never mind that I have never, ever in my life come near a point where I was so exhausted that I couldn’t pop back to normal after a good night’s sleep.

I am living my life as if I had a chronic illness. As if I had chronic fatigue syndrome or something similar.

Which I don’t have. Slightly low energy due to thyroid problems notwithstanding I am healthy, I get enough sleep, I’m reasonably fit and I’m eating well. But I keep being afraid of spending all my energy and then not having any.

Now, I come from a line of couch potatoes who believe that energy is something scarce, that you need to conserve it everywhere you can. It is as if my parents were thinking that energy spent never comes back, and that the people living a life of leisure, basically lying on the sofa, reading and watching TV are the ones who will live long and prosper.

But that is not how I live. I am usually keeping a reserve that is way over the top. I will take preventive breaks, I eat before I’m hungry so that I’ll never starve, and it is as if I am constantly in danger of fainting from over-extension.

If you look at my life objectively that is nonsense.

My work for money takes between two and three hours a day. Then there is a little light housework, 30 to maybe 60 minutes of writing, 45 minutes of exercise three times a week and an average of 15 minutes of music practice per day. That is not an exhausting schedule for someone who is completely fine.

It is all a bit silly.

Now I think I need to flip a switch in my mind. A big one. I already found that I have more energy if I do more some time ago but that hasn’t really sunk in yet. I keep being afraid of running out of energy.

So that was on my mind for most of the day.

I did go for a run but that was more of a walk, really: 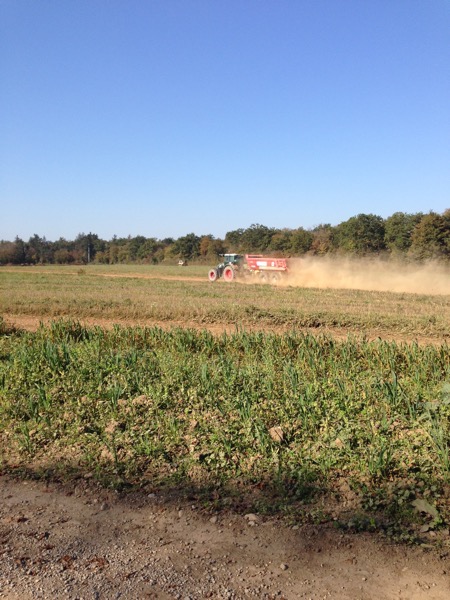 They are still moving earth around in the fields. 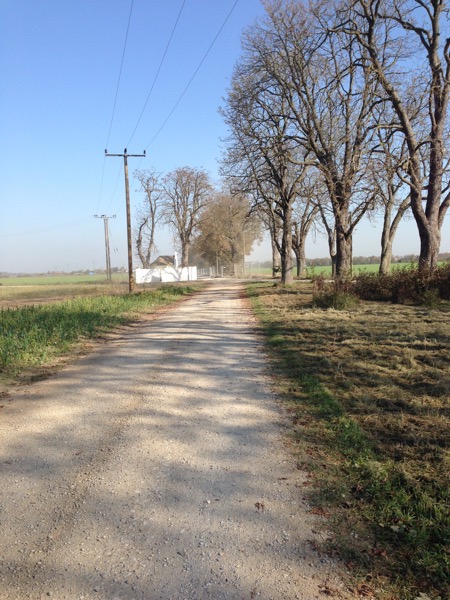 I came back home, lounged around for a bit and helped making feijoada for lunch: 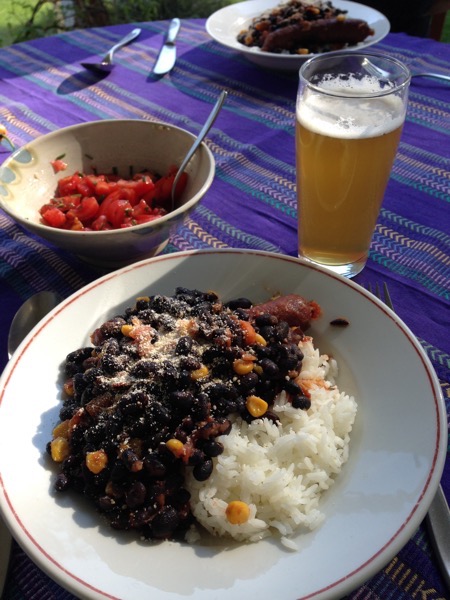 It was warm enough to sit outside, if a little windy.

The boy was full of stories today when he came home for lunch. I’m happy because a) he had an A on an English test, and b) the English teacher offered to give him extra work because he clearly is bored out of his mind. Then he went back to school, wrote his German test and might have failed spectacularly.

I taught three students and spent a little time on the dress-in-progress. The second student was a maybe new one, the first one who had come in by ways of the new sign on our fence. My third student had taken a nap after work and completely overslept, so I worked late because she came a lot later than expected.

Then I wanted to write some more but barely managed. I did prepare the podcast, though, so that was good, wrote a letter to cancel my spinning guild membership and wrote an email to the piano tuner. And tried the new contact lenses.

Today there will be grocery shopping and podcast recording and teaching more students than I thought. And writing. Always writing.