I actually slept until the alarm went off. That was almost disorienting.

Which also meant no writing before breakfast. I did manage to make breakfast on time, though.

I pulled out a sock that had bin lingering in a project bag for, um, quite some time, and made a decision about the next step. I had mentioned that particular sock project in my patreon newsletter so I got curious and found that the reason the thing wasn’t going forward was, again, that there was a problem. Once I made that decision things were much easier.

I did write right after breakfast. I am rather excited for the next bit. That happens pretty often after getting stuck, all of a sudden things start moving again.

Then I did the dishes, went to the health food store because we were still needing things for lunch, ran my 4.8k: 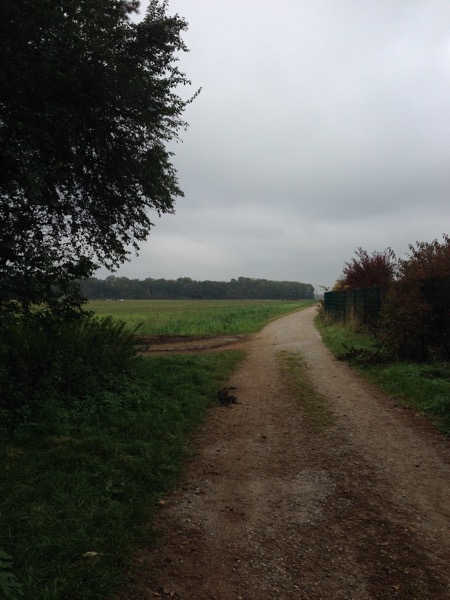 And it was even fun today.

Then I started to make the dough for spaetzle, cut up some mushrooms, took a shower, made the spaetzle, and the did turn out rather nice. It was funny because for some time we just couldn’t find the thing you need to make them. We both thought it should be in the basement because that’s where the old one lived. And then we both thought that it might be upstairs in the kitchen in one particular cupboard. And we both looked in both places repeatedly but couldn’t find it. Making the noodles without it would have been beyond my skills, frankly.

By the third time looking into that cupboard my husband finally found it. For a moment he even thought that we had thrown away the old one from his grandma without buying a new one. Now, you can just use a cutting board and a knife but none of us knows how.

But in the end we prevailed and got lunch ready in time for the boy to eat with us: 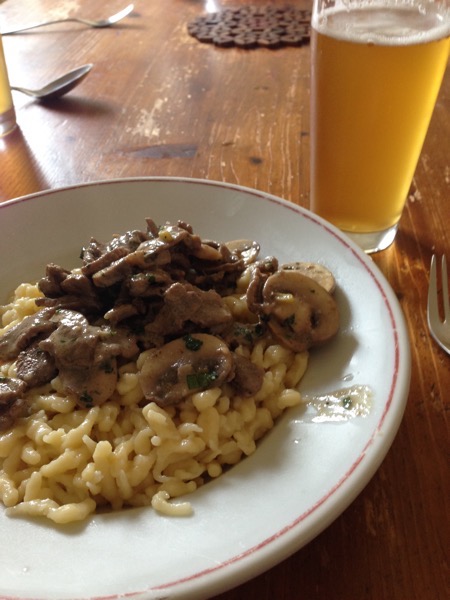 The boy got a lecture about different kinds of beer over lunch because we are having a new alcohol-free beer that tastes exceptionally good. It is Zwickelbier  and my husband keeps telling me that it reminds him of an IPA when in fact it tastes a bit like ale.

The boy didn’t want to try it, though.

I had a long, long list of things I wanted to do before teaching in the afternoon. I only got to do two of the four things or so. The boy came home from school again a little early and we started talking so it was time well spent.

Then there was the teaching. And then the watching of the newest episode of „Doctor Who“. I love it, by the way, and so does the boy. It is very exciting!

Then there was a bit of writing and an early bedtime.

Today there will be some errands and loads of teaching and that will be mostly it. Typical Tuesday.