It was almost a slump day again but in the end I did get stuff done.

Read a bit and surfed the web a bit and got up and had breakfast. I could feel the day slip away already. And I still was stuck on the novel even though I wrote a little the day before.

Then I sat down and planned the coming week and it is looking, um, really busy, And I looked at the things I did want to get done the week before and there were quite a few things undone. It’s alright, though, it’s all self-imposed deadlines.

My husband got up late around nine and the boy came down for breakfast at 9.30. We talked. I did yoga. I helped to make lunch and bought two new books. Maybe three. I also thought about a book I had read as a child and teenager that Konstanze is reading at the moment (and she’s loving it). I am feeling a little uneasy with it and always have but I’m not quite sure why. So I borrowed it from the local library in ebook form and started reading it. Oh, it’s „Herbst im Mumintal“ („Moominvalley in November“). I find it quite dark and that might have been a little too much for me at ten or so.

Here is a picture of our lunch to cheer you up: 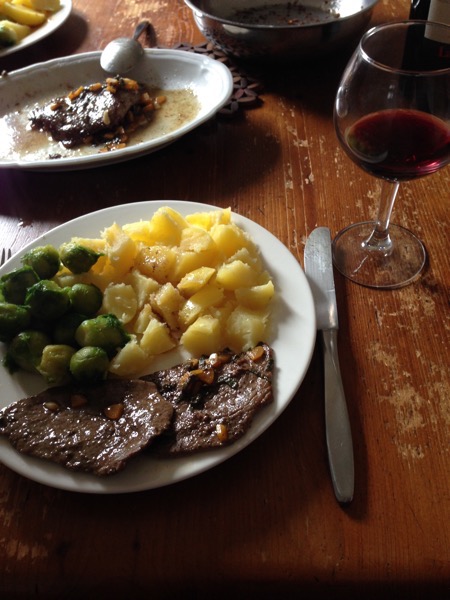 My husband thawed two packages of steak and only later found out that that meant ten really tiny steaks instead of two big ones. I suggested leaving the second package for today. There will be homemade spaetzle and mushrooms if we can manage.

Then there was the dreaded slump after lunch. But! While I sat there reading and slumping at first and watching a recorded webinar I did prevail and wrote my October newsletter. Yes, it was a week late but hey, only a week this time. Of course I vowed to write the November one right away. I already have a short list of topics.

Then I read some more. With all the book-buying and -borrowing I do I am having a serious need of reading all.the.things.

Then I learned how to do understitching. I did not actually stitch anything but I’m counting that as moving my dress project forward. I made a list of things to do for book publication and another list for music lesson marketing. Then I dithered a bit and then I finally wrote some more on the novel-in-progress. Some time in the morning, I think while doing the dishes or knitting I finally had an idea about what would happen next. I’m still not sure if the scene I wrote before will stay in the novel or not but I have made a note and will re-visit that question later. I decided to pretend that I wasn’t really writing anything serious by using the iPad: 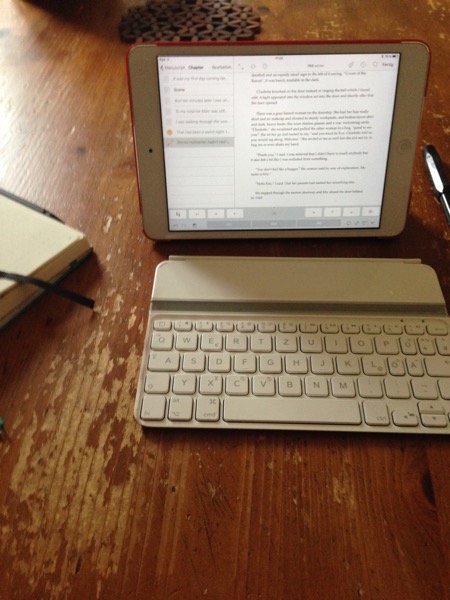 Then it was time for watching Star Trek. We only watched DS 9 again because Next Generation would have been the finale. Which is a 90-minute episode. I wouldn’t like to cut that in half. We discussed when we’ll watch the new episode of Doctor Who. We didn’t want to stay up too late (we will only be able to watch it after it aired in the UK and that would have meant a very late bedtime for both of us). Usually we would have watched it on Friday but the boy will be away over the weekend. So we decided to watch it tonight.

I can’t wait. This will be seriously cool. I hope.

And then I tested the boy on states and capitals again (not good). I know them all by now. He doesn’t. This will continue. I mean, it’s only 16. That should be doable. And then he told me about the new project they will start in art in school next week. They will have to design an album cover. In pencil. And he was freaking out because he would like a brief a week in advance. And the music he listens to is probably not the genre the teacher was thinking of. So we looked at album covers on my phone together. Since I am trying to learn more about design at the moment as well I found the whole thing rather fascinating.

And he said, „She told us about proportions when drawing people so I guess there should be people on the cover but I don’t know.“ And he was dithering and going into panic mode. Because he doesn’t like it that they get the topic and then they have to start right away. So I told him to prepare a couple of concepts in advance. What can he do if there have to be people on the cover. What would he do if it needs to be an existing band? What if he can make the band up? What if he needs a logo?

And then I told him that the minute the teacher tells them what to do he needs to pick one idea and go with it until he finishes it. Because he is the kind of person who keeps questioning his idea until the very end and he never finishes art projects in school and that makes him get bad grades.

He also is still thinking that the idea is the most important part of any creative endeavor. Yeah, right. I mean, a cool idea is a good thing. But how you do something is more important. And finishing things is even more important. The best idea doesn’t do you any good if you never have a finished object. Especially when we’re talking designing for clients or, I don’t know, a school project.

And then I wrote a little more while my husband was playing guitar under my bed. And then I went to sleep.

Today there will be running and teaching and writing and going to the health food store if I can, and making spaetzle from scratch and I have a list of things to do for novel one and sewing would be nice as well, and oh, I might want to make some music too.